Home > News > A northwesterly week on the way...

A northwesterly week on the way 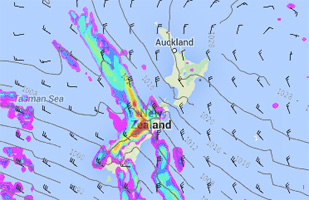 This week is looking like one with plenty of northwesterly airstreams over the country from today through till Friday. During this time a series of fronts will pass over the country, mainly delivering rain in the west and a few spells will make it for a time out east.

On Tuesday, we have an increasing northwesterly airflow over most of the country. A ridge clings to the North Island also but is slowly weakening. The North Island sees areas of morning cloud break to afternoon sunny spells, winds will typically be from the northeast although from the west for regions south of Taranaki. Some western parts of the island and Wellington see mainly cloudy skies all day long. For the South Island expect plenty of high cloud out east, a few spots of rain spread into Southland and Central Otago around midday then into coastal Otago late afternoon / evening. On the West Coast expect cloudy skies, rain about Fiordland spreads north to reach North Westland in the evening.

Thursday sees the front move over the North Island, expect rain for most in the west with heavy falls even possible for a time. Out east expect thick high cloud and the odd spot of rain, winds gusty from the northwest. The South Island is mostly sunny in the east and for Marlborough / Nelson. Winds are light near the coast and west to northwest inland. On the West Coast expect cloudy areas and scattered showers.

Friday sees northwesterlies strengthen over the South Island again, expect rain on the West Coast with heavy falls possible, out east there is high cloud and gusty northwesterlies. For the North Island morning rain clears for most then sunny spells develop, winds west to northwest.