Home > News > A northwesterly kind of week with a few ... 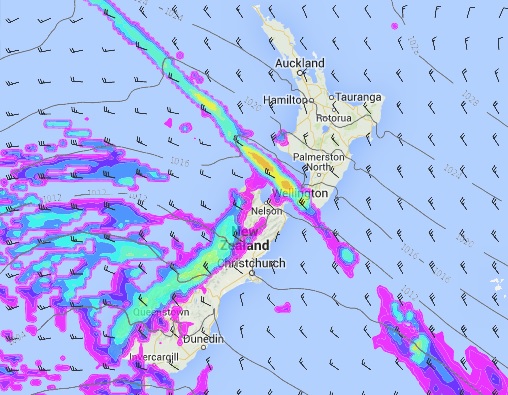 Righteo, lets get to it….

Monday is looking pretty good for most of New Zealand but as always there is a “however”. So for starters the North Island is sitting under a ridge of high pressure, for the most part this is good but it could mean a foggy start for some areas (mainly for the upper North Island). The South Island has a great day out east, showers moving into the west.

A notherwesterly airflow increases on Tuesday, the North Island sees cloud move into the west although some parts of the upper North Island could once again see a foggy start. Warmer out east. The South Island has a fairly reasonable northwesterly airflow pumping through, showers or rain in the west becoming heavy later on, warmer out east with some high cloud. A southwest change moves onto the lower south overnight with showers.

Wednesday has a front move northwards over New Zealand, clearing morning showers for the eastern South Island then sunnier weather in the afternoon. Morning heavy rain in the west eases to showers. For the North Island expect plenty of cloud for most, the odd shower possible in the west then rain moves in during the afternoon and evening. The east coast gets the best weather although expect plenty of high cloud, evening spots of rain for the Wairarapa.

A colder southwest airflow moves through on Thursday but it is fairly brief, but brief isn’t always a calm and respectable situation, heavy falls may develop for some. For the South Island basically we have morning showers in the east with some snow to about 300m then clearing to a sunny afternoon, Marlborough and Nelson can kick that snow level up 100 or 200m. The West Coast becomes mostly sunny in the morning.

Over the North Island a morning front clears off to the northeast meaning early rain clearing then sunny areas for a time, but watch out for the afternoon as a cold south to southwest change is on the way bringing heavy showers and gusty winds for many. Some snow is likely about the Central North Island so the ski fields there will be happy, perhaps not the best for travellers on Thursday evening so keep up to date with the latest forecasts if on the move around then.

Then to end the week we have a fairly breezy west to southwest airflow lying over the country, cloudy areas for many in the west with the odd shower about, especially the South Island’s West Coast. Sunnier in the east for both islands with slightly warmer temperatures.