A mixed week on the way – becoming sticky and unstable 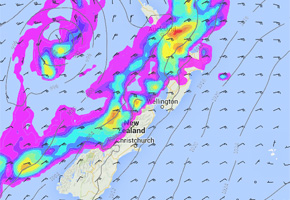 Thatâ€™s probably not news to some as the weather has been up in the air for the last we while. And to add to that the humidity is likely to rise for most as the week goes on making things a bit uncomfortable especially over the North Island. However we shall persist and see what this week has in store.

Monday looks largely settled for the South Island due to high pressure, mostly sunny weather with light winds and afternoon sea breezes. The Interesting bit however is about inland Mid Canterbury southwards through to inland Southland, afternoon heating could cause a few isolated showers late afternoon / evening, these have the potential to turn heavy with thunderstorms especially about inland Southland and inland Otago.

Tuesday sees another stunner for the South Island, afternoon sea breezes for most with easterlies along the east coast a bit brisk at times. A chance of isolated showers late afternoon / evening again in the same spots as above however the risk is less but should they get going a thunderstorm isnâ€™t out of the question. The North Island has easterly quarter winds for most brisk along the east coast, cloudy about the Coromandel northwards with the odd shower, rain late afternoon / evening for Northland spreads south later in the day.

Rain spreads south over the North Island on Wednesday with gusty east to northeast winds as a low sits out to the west in the Tasman, heavy falls possible about Northland (more so in the east), the Coromandel then the Bay Of Plenty as a front moves southwards. On the front or just in behind there is the chance for heavy sharp showers and possible thunderstorms to move in about Northland and Auckland during the afternoon, while not overly likely the low chance of a small tornado in these type of situations is not out of the question.

About the South Island cloud increases in the north with showers moving into Nelson / Marlborough in the afternoon then down the West Coast and into Canterbury by evening. Southland looks to have the best weather but the risk of a rouge isolated heavy shower late afternoon / evening is there with the possibility of a thunderstorm.

Thursday has a low sitting over central New Zealand, expect a very mixed day for much of the country with cloudy areas and showers, sunny spells for some especially for eastern regions of the North Island and western / southern regions in the South Island. Unstable conditions develop in the afternoon about lower parts of the North Island and the upper South Island so thunderstorms may develop in these areas.

Friday is another mixed day, the North Island more likely then not will see isolated showers about possibly heavy for Northland and some eastern regions in the afternoon but sunny areas are expected also. Over the South Island a mostly sunny day is expected but inland parts could see isolated showers develop afternoon / evening and a risk of thunderstorms is present once again, mainly about inland parts of the lower and upper South Island.