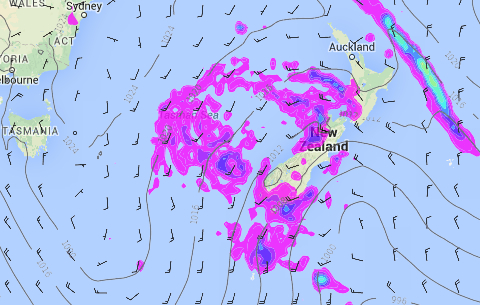 There’s something for everyone in Tuesday’s weather, depending on where you are in the country.

The North Island’s weather is dominated by a weak low pressure system, which will bring a mixture of light winds, cloudy periods and sunny spells for almost everyone.
Isolated showers could creep in for many during the afternoon, while the East Coast will start off sunny but deteriorate as the day goes on.

For the South Island, for those in the east and south it’s looking similar to the North Island, cloudy periods, sunny spells and a few showers about too.
Showers may become heavy for some inland areas in the afternoon, with a chance of hail, and then ease towards evening.
Nelson is looking at a nice start to the day, some sun and light winds, but things may get a bit wet around the ranges towards evening.
And on the West Coast, it’s more of the same – sunny to start, with isolated showers about the ranges in the afternoon.
Winds are looking mainly light for most places, coming from the south or southwest.