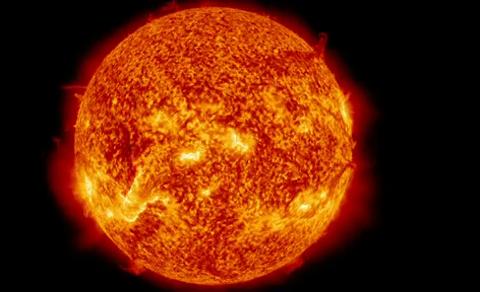 Earth is 15 years from a “mini ice age” that will cause bitterly cold winters during which rivers freeze over, scientists have predicted.

Solar researchers at the University of Northumbria have created a new model of the sun’s activity which they claim produces “unprecedentedly accurate predictions”.

They said fluid movements within the sun, thought to create 11-year cycles in the weather, will converge in such a way that temperatures will fall dramatically in the 2030s.

Solar activity will fall by 60 per cent as two waves of fluid “effectively cancel each other out”, according to Professor Valentina Zharkova.

In a presentation to the National Astronomy Meeting in Wales, she said the result would be similar to freezing conditions of the late 17th century. “[In the cycle between 2030 and 2040] the two waves exactly mirror each other – peaking at the same time but in opposite hemispheres of the sun,” she said.

“Their interaction will be disruptive, or they will nearly cancel each other. We predict this will lead to the properties of a ‘Maunder minimum’.”

Maunder minimum, indicating low sunspot activity, was the name given to the period between 1645 and 1715 when Europe and North America experienced very cold winters.

In England during this “Little Ice Age”, River Thames frost fairs were held. In the winter of 1683-84 the Thames froze over for seven weeks, making it “passable by foot”, according to historical records.

Zharkova said scientists had known about one dynamo caused by convecting fluids deep within the sun, but her research appeared to have uncovered another. “We found magnetic wave components appearing in pairs, originating in two different layers in the sun’s interior,” she said.

“They both have a frequency of approximately 11 years, although this frequency is slightly different, and they are offset in time.

“Over the cycle, the waves fluctuate between the northern and southern hemispheres of the sun. Combining both waves together and comparing to real data for the current solar cycle, we found our predictions showed an accuracy of 97 per cent.”

This had helped create a picture of what would happen in the 2030s.

“When the waves are approximately in phase, they can show strong interaction, or resonance, and we have strong solar activity. When there is full phase separation, we have conditions last seen during the Maunder minimum, 370 years ago.”

I’m trying to find a transcript of Prof Zhakova’s presentation, I haven’t yet, but nowhere can I find her actually quoted as saying that they (the astonomers) expect a mini ice age. They have predicted a Maunder Minimum, which last time it occured in the 17th century is thought to have caused the mini ice age. It took a journalist to jump to the conclusion that it WILL cause a mini ice age this time.

Of course in the 17th century there was no AGW. Will the Maunder minimum be enough to counter AGW? An important question to ask. I hope so, but this study suggests not   http://www.nature.com/ncomms/2015/150623/ncomms8535/abs/ncomms8535.html Definitely worth a closer look though.

In the meantime probably best not to go about repeating the premature musings of tabloid journalists.

Journalists have been spreading misinformation for years regarding so called AGW/global warming, now they’re trying to scare the sheeple with an ice age. Gary has just noticed the media can’t be relied on, go figure.

They’ve been spreading information you don’t like, that doesn’t make it disinformation. Unfortunately not wanting something to be true is not enough. If you have some evidence what they say is wrong, you should present it. Evidence though, not belief. As my previous post implied, I’m open to being convinced. Perhaps you should too.

Gary the evidence is there in the science that is presented by sceptical scientists, just take your blinkers off and look.

You’re right it is information I don’t like because it’s so different to reality which to put it politly is misinformation. Take a look at – Snow storms, floods, records broken – our news media has gone nuts (an article on this site).

Then perhaps you can explain why we’re doomed from rising sea levels when NOAA’s best tide gauges show a rise of only 1mm per year and the satellites showed the same until they were ‘adjusted’.

Why we’re doomed from rising temperatures when temperatures haven’t risen for nearly two decades despite an apparent huge rise in emissions.

Why it is that media present doom from ever increasing extreme weather when data show there has been no such increase.  I could go on…and on…

Well you’ve clearly made up your mind and yet ironically you’re accusing me of being blinkered. Are any of your un-named “skeptical scientists” predicting a mini ice age?

But it seems my skepticism of journalist standards was correct: http://arstechnica.com/science/2015/07/the-maunder-minimum-is-back-maybe-and-we-probably-wont-notice/ ;

“One of the ironies here is that the “climate skeptic” crowd that is embracing this study also tells us not to trust models of complex systems and doesn’t think 150 years worth of temperature data is informative, yet it has latched on to a model validated with 30 years of data.”

The proof will be in the pudding. I’ll have mine hot with custard thanks. Just the thing when we’re freezing our butts off. Better to be prepared than surprised