Home > News > A mainly settled week then finishing off...

A mainly settled week then finishing off with a low 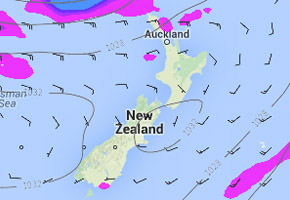 This week has to be one of the more settled weeks weâ€™ve seen in a while, this due to an anticyclone that hangs around for much of this time. From ealy this week however a low builds in the Tasman Sea and slowly pushes closer to New Zealand as time goes on.

For todayâ€™s weather check out this mornings national forecast here

Tuesday is very much a repeat of the weather on Monday with an anticyclone still holding its ground. Cloud a little more persistent about Northland however in an easterly airflow, there may even be a light shower at times in the east.

Wednesday is mostly sunny for the South Island and lower North Island with light winds as high pressure still dominates, still a chance of some cloud morning and night. A low in the north Tasman Sea pushes closer
towards the upper North Island however and brings an increase in areas of cloud and easterly winds. Patchy light showers affect Northland during the day especially in the east.

An easterly airflow gradually picks up for most of the country on Thursday as our resident high now starts to move off to the east and a low in the north Tasman squeezes in a bit closer yet again, easterlies about Northland and possibly Auckland will start to get gusty and strong. The weather in general for the South Island and lower North Island is mostly sunny once again although watch for areas of cloud morning and night.

About the Waikato northwards thatâ€™s where cloud becomes more prominent, Northland sees showers for much of the day then some rain moves in overnight.

Finally on Friday easterlies lie across the South Island with mostly sunny weather although areas of cloud could affect the east coast especially morning and night. A very similar pattern is likely for the lower North Island. About the Waikato and northwards expect periods of rain with strong easterly winds, rain may be heavy about Northland. The Bay Of Plenty will likely see cloudy skies with the odd shower in the west.

By the time the weekend comes around currently itâ€™s looking like a wet Saturday for most of the North Island and cloud with drizzle about the upper South Island, lower South Island regions may be the place to be! Not the best week for ski fields unfortunately thatâ€™s for sure, again.