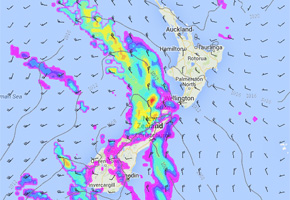 Next week is looking fairly average, no major extremes until perhaps the end of the week. Weâ€™ll have some settled periods but also a few scenarios likely to deliver cloud and areas of rain for some.

On Monday we have a brisk to strong southwesterly airflow lying over New Zealand. In the west of the country expect cloudy areas with the chance of a shower now and then, the West Coast of the South Island will likely have showers during much of the day then easing later in the evening. For eastern parts of NZ the weather is more settled with light winds although westerlies about inland areas may be fairly breezy. Southland and Otago will likely see strong west to southwest winds, a few showers for Southland may move into Otago mainly near the coast in the afternoon.

Tuesday has a ridge over New Zealand spreading out from a high in the Tasman Sea, conditions will be settled for most with mostly sunny weather, watch for a cold start though with inland areas of both islands seeing some frost potential. The East Coast of the North Island will see some cloud and the chance of a shower during the day however, Northland and Auckland also see cloudy areas and the chance of a shower however cloud will gradually clear from the south during the afternoon.

A low and front combination push onto the South Island on Thursday. Expect rain in the west of the South Island pushing north during the day with heavy falls, high cloud out east with gusty northwesterly winds. A southwest changes moves onto the lower South Island in the afternoon then up to about Canterbury by evening bringing showers and cooler temperatures. The North Island can expect increasing northwesterly winds, increasing cloud out west with showers later in the day then rain overnight. Mostly sunny in the east with high cloud.

Friday brings a clearing picture for most as a southwesterly airflow eases and a ridge pushes in extending out from a high west of New Zealand. Northland may be a region to watch however as there are indications of a front stalling over the area then linking up with a new low pressure system moving in from the north Tasman Sea which could mean some heavy rain.