A front to kick off the week 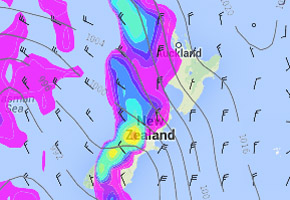 Yes a frontal system moves in from the west on Monday bringing cloudy skies and rain for many, it wonâ€™t be cold though. Eastern regions donâ€™t do too badly with reasonably mild to warm temperatures and only brief rain when the front passes over.

For the upper North Island expect cloudy skies with rain developing in the morning, there could be an isolated heavy fall about otherwise patchy rain seems more likely. North to northeasterly winds become brisk, then in the evening winds change northwest with rain clearing for many although the odd shower may remain for the remainder of the day.

About the lower North Island expect increasing northerlies in the morning with rain developing, heavier falls about Taranaki with patchier rain further south. Once again winds change northwest in the evening with rain
easing to the odd shower. The east coast has thick high cloud for much of the
day with increasing northerlies from morning, a few brief spells of rain move
through late afternoon or evening then clear.

For the South Islandâ€™s West Coast and about Nelson expect rain with the odd heavy fall, easing later in the
evening as winds change more southwest. Thick high cloud for the majority of the
east coast with a few brief spells of morning rain then clearing, a mostly sunny
afternoon is expected with mild northwesterlies.

More interested in Tue-Thursday’s forecast and whether we can expect snow to low levels near Dunedin.

An outlook on the week ahead as always will come out tomorrow morning at 7am 🙂 So make sure to catch that story!