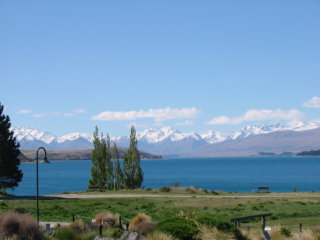 Much of the country should see sunshine at some stage and in some cases it’s started off crunchy but the big yellow should stay for much of the day in those areas.

Temperatures have dropped below freezing over the far south and frosts developed with temperatures of minus one and two recorded at Dunedin airport, Lumsden and Manapouri and it’s zero in Queenstown, Gore and Oamaru.

Southerly quarter winds kept temperatures a little higher than expected overnight over many North Island areas however tonight if the winds fade away there could be a noticeable drop in temperature.

Now cloud and a handful of showers could dot eastern parts of the North Island today so Gisborne and Napier look decidely average at this point. Also some cloud build ups later over the upper north could produce a shower or two.

The frosts in the south have surprised a few this week.”Some of these lows are more like August than this late in the year” says weather analyst Richard Green.
” The cold nights will come and go for the early part of November and some of the minimum temperatures are almost six or seven degrees below average which is frustrating for growers” he says.” Icy windscreens for drivers just before summer kicks in seems a little harsh as well!”

Yesterday’s windchill factors were low in a cool to cold southerly breeze but showers were mostly scattered and blue skies were fairly predominant in the west.

The week ahead as of today looks mostly dry however pockets of showers may pop up across the upper north and inland ranges in the afternoons from time to time.