A day to remember… 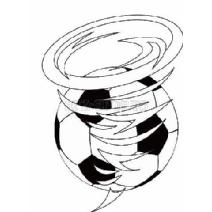 Nicole Gordon from Minnesota, USA had an experience on a sportsfield as a youngster that caught her and her fellow players by surprise…

It was a hot, steamy day for an afternoon soccer game. I was 10 years old and forgot to bring my soccer shoes along, so the coach made me play goalie in sandals. My team was ahead by a few goals. From where I stood in the net, bored and sweating, I had a perfect view of thunderclouds swelling on the horizon.

The longer the game went on, the darker the sky got. Thunderstorms can blow in quickly on summer days in southern Minnesota, but even so, we were surprised at how soon the first raindrops fell. By half-time it was pouring and lightning strikes were close enough to our field that the referee temporarily stopped the game.

I was huddling with my teammates in a canvas tent by the side of the field waiting for the storm to pass when we saw a funnel forming at the bottom of the clouds. Before we realized what has happening, a tornado was spiraling down from the sky, spinning tight and fast toward the ground. The tornado touched down on the soccer field. A few kilometres away, another twister was also dropping from the clouds. A third twister would appear shortly in the distance over the town of Blaine.

In a flurry of flying lawn chairs, wet blankets and soccer bags, parents grabbed their kids and ran in different directions. My family’s car was several fields away and there was no good shelter nearby and no time to think. We ran to the nearest drainage ditch.

We crouched just above the ditch water, worried about lightning strikes, and watched the tornado come closer until it was just across the field and the grass flew in its wake I could see every detail of its twisting body. We ran across the next field and ducked into another ditch.

We ran from ditch to ditch three times, planning our routes and sprinting through the wind. I remember being scared but also thinking that the three tornadoes were the most amazing things I’d ever seen. In the distance we even saw debris flying at the base of the tornado over town.

And then, in the same way it came, the tornado shrank and melted back into the sky into wisps of cloud. The rain stopped and the clouds loosened. The sun came out and dried our clothes as we walked to the car, cold and tired but happy to be safe and grateful for what we’d just seen.