Home > News > A couple of fronts move on through...

A couple of fronts move on through 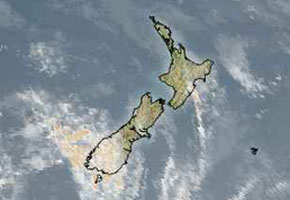 A front moved over the lower South Island last night and has continued northwards today weakening considerably as it has moved northwards, not much has come of this front apart from a few showers and a wind change for a time bringing some cloud in the South Island.

Meanwhile a second front is about to move onto the lower South Island now, this front is forecast to even be a bit weaker yet again so it will not affect our weather too much apart from some cloud and shifty wind directions mainly in the South Island. Southland however is likely to receive a few more showers then most.

Scattered showers have popped up again over parts of the North Island mainly about Northland, Waikato and inland Bay Of Plenty across to some ranges in Hawkes Bay and Gisborne. Storms haven’t managed to fire like they did yesterday over the Central North Island but there is still some time left in the day so still something to watch.

The most rain for the previous 24 hours has come from those storms yesterday about the CNI, up to 14mm fell in some stations. It is quite likely that more rain then this fell in some other isolated areas. Winds have not been exceptionally strong in any particular area today. The warmest temperatures go to Blenheim on 26 degrees and then in the North Island, Hawkes Bay and Gisborne on 23-24 degrees.