A chat with a storm fanatic 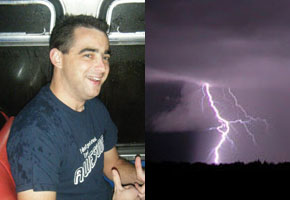 Thunderstorms are a passion for a number of Kiwis(including myself) so I thought i’d have a yarn with someone else who enjoys them as much as me!
Storm chasing colleague Jason Tippet also thrives on a good hunt and he’s been out chasing with me in the past and regularly attends weather get togethers in Canterbury.

So I put the following questions to him…

Aaron: What is your earliest memory of the weather and what made you really get into it?

Jason: I can remember about 15 years ago a thunderstorm occurring at night that had thunder so loud it rattled shelves in my room, i woke from my sleep and just opened the curtains up to watch the lightning.
The next day we had big NW winds and i was out there enjoying the fact the plastic chairs were flying around while everyone else was in a mad flap trying to secure everything.
That’s where it all started for me i just really enjoy the power behind mother nature in weather at its best.

Aaron: So with your interest in the weather you managed to track down a group called the New Zealand Thunderstorm Society in Christchurch, how did you find them?

Jason: Back in 2003 i think it was there was an article in The Press about the society which John Gaul and Bob Crowder were a part of and its there i learned more about the wide scope of people out there just like me that were interested in weather and storms.
I followed on to the New Zealand weather forum where i could find like minded people.

Aaron: Great stuff. Out of the thunderstorms you have seen what is the best storm you have chased or witnessed in Canterbury?

Jason: Every thunderstorm is different and has its own characteristics but January 18th 2009 was a day to remember of severity viewing a funnel cloud some decent lightning and severe flash flooding in some areas.
However even though i was late chasing for the September 4th storm this year i still managed to park up near the airport and witness not only a fantastic display of lightning but also the best cloud structure i have ever seen of mesocylonic nature, that was a day to remember.

Aaron: Yes the September 4th storm this year was a cracker. Would you like to travel overseas to chase storms and what is something that you haven’t seen yet that you would really like to see.

Jason: Yes a trip over to the states through the mid west would be ideal where i could chase for weeks on end and view the biggest of all thunderstorms in the supercell variety and amazing structure.
Definitely worth saving for, a must do in future.
The one thing i would like to see is a full blown tornado on the ground.

Now here are some of the places / names mentioned above through the clickable links below.