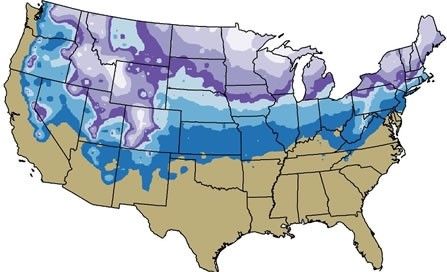 By WeatherWatch.co.nz Analyst Howard Joseph — Growing up in the northern United States, it’s hard to remember a Christmas without snow.  The two go hand in hand.

Sometimes, you end up with a year like this one.  A year where all the storms either go north or south of the northern tier of the United States.  Often you see this in an active “La Nina” year, as is the case this year.

The result is many folks who normally wake up to a landscape covered in snow on Christmas Day, woke up to a bare ground and maybe, just maybe a little frosting of snow here and there.

You might think that a snowless Christmas sounds nice.  And in some cases, it is.  It can make holiday travel a lot less hectic.  But a lack of white does not mean an abundance of green.  In places like the states of Minnesota, North and South Dakota and Wisconsin, everything has gone into hibernation for the winter.  You don’t have the lush, green vegetation of the summer like we do here in New Zealand.  All you have is brown grass, dirt and mud.  Hence, the name “Brown Christmas”.

The last time this happened was 2006.  It actually took until 31 December before there was a widespread snow pack down in the northern US.  Usually, you see a pretty widespread snowpack by early to mid December.  In Jamestown, North Dakota where about 12.5cm of snow would have accumulated on the ground by now, they have nothing.  In Minneapolis, Minnesota they have just a trace of snow on the ground.  One year ago, the local domed sports arena was flattened by a fierce snowstorm that dumped about 43cm of snow on the area in less than 24 hours.

So while the higher elevations of the US are seeing some of the white stuff, many areas that are normally white for Christmas are having to settle for the stuff that you spray on the windows.