A bit of gloom to dull down your day 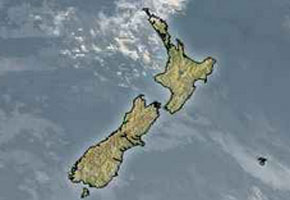 It has been a bit of a gloomy old day for some of us around the country, particularly Auckland and Christchurch where skies have been mostly cloudy all day. An anticyclone is trapping the cloud low down with the assistance of a temperature inversion near the surface, more specifically for Auckland there is warm slot of air at about 900 millibars or 1000 meters above the surface. It acts as a lid on the cloud and doesn’t let it break up.

As this article is being put out sun is managing to break through in Christchurch, it is a welcome sight to the end of the day.

Not all have had gloomy skies however. The Bay Of Plenty and West Coast of the South Island have had brilliant sunshine, these regions being more sheltered from the airflows bringing in the gloom. Consequently Tauranga has had the warmest temperatures today, getting up to 24 degrees.

Rainfall has been fairly light over the country during the past 24 hours, only light falls affecting mainly coastal areas in the southern half of the South Island.

Skies should be a bit brighter tomorrow however it could well be a cloudy start again in the morning before sunshine breaks through.

Parts of the Central North Island could be interesting tomorrow where these is a chance of afternoon thunderstorms, so the WeatherWatch team will be watching of course with interest.

…pretty much the same old formula for Auckland.

Sun is starting to shine in Auckland, great to see it! Even if its just for a moment during the day 🙂

Maybe it was short lived, even the odd light shower or drizzle patch out west this evening.