Home > News > A battle in the skies before New Years E...

A battle in the skies before New Years Eve 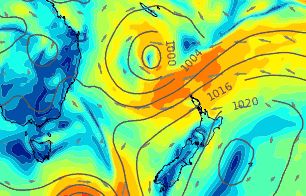 Forecasters are mostly confident about the predictions made for Christmas Day, but the following week has a big question marking hanging over it, if long range computer models are anything to go by says WeatherWatch.co.nz.

Two of the models we trust most to help prepare our long range predictions are both agreeing that a sub-tropical storm is forming to our north west – but what they can’t agree on is whether or not northern New Zealand will be hit.

In fact in parts of Waikato the ground remains soggy more like early spring than early summer.

“Think of the sub-tropical low as evil and the high as good – this is a classic good verses evil set up”.

“If the high stays strong, many will consider that a good prediction.  If the low comes in and brings wind and rain to northern New Zealand I’d say it’s safe to say most will think that’s a bad forecast”.

Mr Duncan says the models show the low deepening to the north west of the country, near New Caledonia, around Christmas Eve then drifting south east towards New Zealand.  “Some long range maps show the high pushing back, trying to keep the sunny weather up for the last week of 2011, while other maps show the low winning, and pushing into the upper North Island in about 6 to 9 days time”.

WeatherWatch.co.nz says while there is a high risk the low will move near New Zealand, the chance of it hitting New Zealand remains low to moderate.

In this depicted situation,best weathers south of the central plateau to Wellington or many parts of the south island especially inland,you wont get blown around and likely to have enough sunshine.

Is there any chance this could roll across the top of NZ and drop down the east side? Or are the models solid on it dropping into the tasman?

Currently the models show it coming down into northern NZ then the east coast, followed by a seperate system coming in from the west right around the middle to end of next week.  The models are still unsure though and we won’t have a more concrete prediction for another couple more days – but we’ll keep the updates coming.

Thanks for the heads up on next week. The maps I have here are also undecided but it doesn’t look good really. Fairly typical of Xmas New Year where all the campers get blown to bits and washed out and then things settle after New Year when most have gone home.

All the very best for the festive season & go well in 2012. Keep up the great work we all enjoy your coverage. Cheers Dave

yep that about sums up new-year