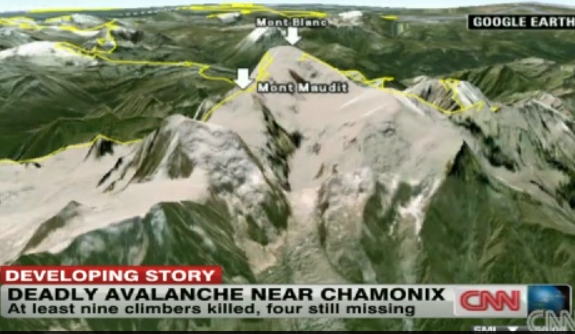 A summer climbing expedition in the French Alps turned to tragedy early Thursday when a six-foot wall of snow came crashing down on two groups of climbers, leaving nine dead, French police said.

Two people caught in the avalanche on the Mont Blanc massif were found alive in the snow afterward.
Four others had been unaccounted for but later were found, police said. They had taken a different path on the mountain.

Before the four were found, the search for them had been suspended just before 5 p.m. because of weather conditions, police said.

Three people from Germany, three from Britain, two from Spain and one from Switzerland were killed, Haute-Savoie police said, but the nationalities of the missing are unknown. There were also French climbers in the party.

Twelve people were injured, some of whom have already left the hospital because they had only minor injuries, police said.

Police said a slab of snow and ice was thought to have triggered the avalanche but did not know what had dislodged it.

Two groups of climbers were caught in the avalanche on the north side of Mont Maudit in the Mont Blanc range, near Chamonix on the French-Italian border, police said.

A total of 28 climbers in the two groups were connected by ropes, said authorities in Annecy, France.

Some of the climbers managed to get themselves back to their base at the Refuge des Cosmiques and raised the alarm. A mountain rescue unit was called out at 5:25 a.m.

The route the climbers were taking up Mont Maudit is very popular with alpinists tackling the mighty Mont Blanc, said Alexis Hennebelle of Radio Mont Blanc.

The climbers were very unlucky to be caught in such a catastrophic avalanche, he told CNN.

Local newspaper Le Dauphine said it was the deadliest accident in the French Alps since 2003.

French Interior Minister Manuel Valls visited Chamonix on Thursday afternoon to see the rescue efforts for himself.
Speaking to reporters, he said the Mont Blanc range is, sadly, often the scene of dramas, but this is a particularly unfortunate incident.

Valls paid tribute to the efforts of the emergency workers, French and Italian, who searched in perilous conditions of snow, ice and wind from the early morning for those who were missing.

“They’ve shown their professionalism, their sense of duty, to bring help in difficult conditions,” he said.
Valls said it was too soon to establish any responsibility for what had happened, and asked people to wait for the results of an investigation.

Chamonix official Jean-Louis Verdier, who is responsible for mountain security, said there had been no clue

Thursday morning that such a deadly avalanche might be unleashed.

The climbers were on a steep slope where there was snow, which meant an avalanche was possible, but there wasno reason to suspect it would happen then, he told CNN affiliate BFM TV.

Bertrand Francois, of the Haute-Savoie police, told BFM the number of victims was a result of the high number of people in the area at this time of year.

CNN meteorologist Mari Ramos said changes in temperature and heavy rainfall over the past week in the area may have created conditions in which sheets of ice like the one that fell are formed.

According to the website pistehors.com, which recorded climbing deaths in the French Alps between 2003 and 2008, the number of deaths seen Thursday is unusual in a single incident.

For the 2007-2008 season, there were 12 recorded avalanche deaths for climbers, eight of them in one accident.

However, in the other years, the annual total for climbing deaths by avalanche ranged between one and five, according to its figures.

Mont Blanc is the highest mountain in Western Europe, at nearly 15,800 feet.

Mont Maudit, about 1,000 feet lower and the third-highest peak in the range, seems to have lived up to its name, which can be translated as “hateful” or “cursed.”

– CNN.com (channel 91 on Sky for updates across the day)