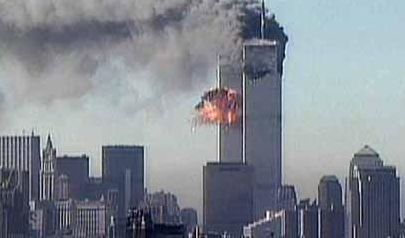 Isn’t it amazing, 10 years later and the footage from September 11, 2001, is still just as haunting and surreal as it was back then.  Those jets, with so many human beings on board, being flown into those giant buildings… and worse, seeing both of those buildings collapse as the metal inside melted like butter from the inferno.

At the time my Canadian girlfriend had returned to Ontario, just one week before this happened, to renew her visa to live here.  It feels insane to say this now, but at the time we really did wonder if the borders would remain shut.  Would it be months or years before we saw each other again?  The uncertainty at that time was quite overwhelming, not only for us, but for many people all over the world.

The attacks were profound.  Some might even argue the depth of the attacks went far beyond the carnage on that day.  10 years later and the US super-power is cracked and damaged.  9/11 was used to attack Iraq – the never-ending war that has drained much needed money out of the US economy. Trillions of dollars spent which have done nothing to make America safer from these types of attacks.  The recession recently – and perhaps still ongoing – isn’t helping either, and while not directly linked to 9/11 one could argue they are all related in some way.

The mental affect of those terrorist attacks is still profound.

A major power cut across some states on Friday NZT saw 2 million people without power for no apparent reason.  The first thing I read from the utility company was “this is not an act of terrorism”.  We might roll our eyes here in New Zealand at saying that first up – but can you imagine living in a country where your nerves are frayed and that is your first instinct.

But going back to that day… it was September 12 here in New Zealand.  I remember telling myself that day that I will “never forget September 12″…but I didn’t think about the time difference and that it would be the US time that would never be forgotten.

These horrific attacks were made all the more powerful by the weather that day.

If it had been cloudy, or raining, we might never have seen those images on TV of the planes crashing… the distant shots of the buildings may never have been captured if it had been raining.

The contrast of the jets exploding into the World Trade Center, the dark grey smoke, the orange flames, and the people jumping…it all stood out in contrast to the beautiful blue sky.

When those towers collapsed the smoke and ash and debris floated into the sky and drifted slowly in the breeze.

The carnage at ground zero was surreal compared to the tranquil weather that day.

It was the same at the Pentagon and in Pennsylvania.  Blue summer skies, light winds.

Here in New Zealand we had the exact same weather.  At least, where I was in Auckland.  Clear blue skies that morning, no wind, and warm.

It seemed to have a profound affect on me – it drew me in and made me feel like this attack had happened in my own backyard.

10 years on and the feelings are just as raw… but these days most of us don’t sit down and think about that day.  It’s easier to not think about it.

When I was in the US a couple of years ago I visited a large TV news channel.  The person that showed me around was originally from New York.  Despite working for a news channel he had managed to avoid watching some of the most disturbing footage from that day.

He told me he didn’t watch any of their coverage for several years after the event because he had been working so hard during the day and had no desire to watch it after the fact. However his senior work responsibilities required him to eventually look through the footage many years later, something he found extraordinarily difficult.

That may sound reasonable to you, but remember he works for a news organisation – news people love big stories,  But this one was different.  This one was far more personal.

The pain runs very deep over there.

The world we live in is just as unpredictable as the weather that surrounds it.

And on this sad, reflective day, it’s important to also see what is good in life.  To enjoy and make the most of what we have now.

But it still amazes me 10 years on… that when I see a passenger jet flying on a clear blue sky day, I can’t help but have those memories of passenger jets crashing, and buildings burning and falling on that otherwise peaceful, beautiful, blue sky day.

I remember where I was on Sep 11, I was away with my boyfriend on holiday on the East Coast of England, I heard something on a shop radio,  then we rushed into the chippy to see it on their TV, we then stayed in our static caravan all afternoon watching it all as it unfolded, I will never forget the image of people chucking themselves out of the windows.

Last night I watched the programme on Prime, the one from the Fire Fighters viewpoint, I was shocked and amazed at what happened inside the buildings and all the total chaos.  My fiance is a firefighter so this was very real for me.  Totally shocking, I will never forget….. a few more tears last night and no doubt a few more in the future for all the people who lost their lives on that unforgettable day RIP xx