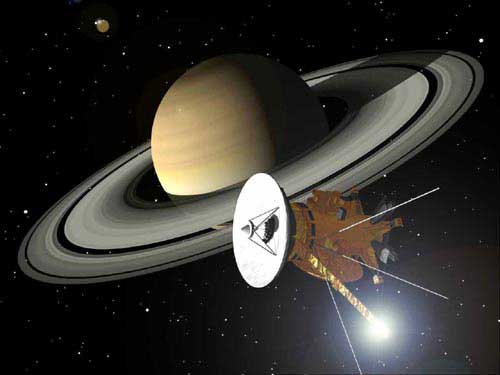 A powerful lightning storm in Saturn’s atmosphere that began in mid-January 2009 has become the Solar System’s longest continuously observed thunderstorm. It broke the record duration of 7.5 months set by another thunderstorm observed on Saturn by NASA’s Cassini spacecraft between November 2007 and July 2008.

The observations of the thunderstorm were to be presented by Dr Georg Fischer of the Austrian Academy of Sciences at the European Planetary Science Congress in Potsdam, Germany, yesterday.

The current thunderstorm on Saturn is the ninth that has been measured since Cassini swung into orbit around Saturn in July 2004. Lightning discharges in Saturn’s atmosphere emit very powerful radio waves, which are measured by the antennas and receivers of the Cassini Radio and Plasma Wave Science (RPWS) instrument.

Dr Fischer said, “These lightning storms are not only astonishing for their power and longevity, the radio waves that they emit are also useful for studying Saturn’s ionosphere, the charged layer that surrounds the planet a few thousand kilometres above the cloud tops. The radio waves have to cross the ionosphere to get to Cassini and thereby act as a natural tool to probe the structure of the layer and the levels of ionisation in different regions.”

Lightning storms on Saturn usually occur in a region that nicknamed “Storm Alley” by scientists, which lies 35 degrees south of Saturn’s equator.

Dr Fischer commented, “The reason why we see lightning in this peculiar location is not completely clear. It could be that this latitude is one of the few places in Saturn’s atmosphere that allow large-scale vertical convection of water clouds, which is necessary for thunderstorms to develop.