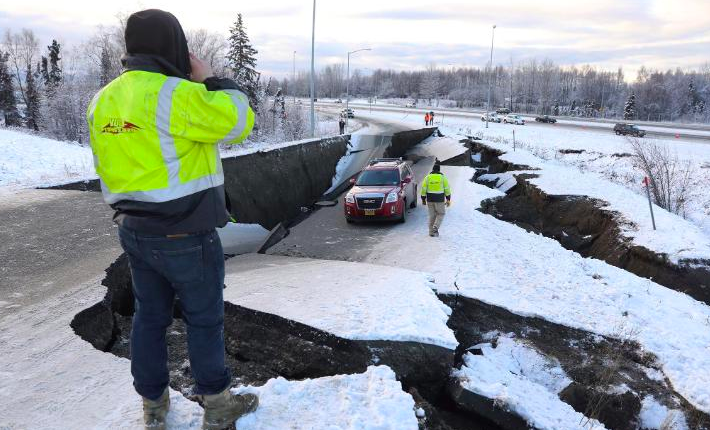 The booming quake hit about 8:30 a.m. local time some 10 miles (16km) northeast of Anchorage, at a depth of 21 miles (40km), according to the US Geological Survey. Aftershocks continued after the tsunami warning was canceled.
“It was very loud when it came,” Anchorage Mayor Ethan Berkowitz said. “It was very clear that this was something bigger than what we normally experience. We live in earthquake country so folks … but this was a big one.”

– A stranded vehicle on a collapsed roadway near the Anchorage airport after the 7.0 earthquake.
Social media and television news video depicted scenes of chaos, including students taking shelter under desks while sending texts from their phones, roads buckling under passing cars, grocery store products tumbling from shelves, hospital workers scrambling for cover and panicked attorneys under tables as a courtroom rocked from side to side.

– Window glass crashed to the ground outside CNN affiliate KTVA’s offices.
The quake also knocked CNN affiliate KTUU off the air. Items rained down from shelves and ceilings at the station, news director Tracy Sabo told CNN’s Sara Finch.
“It was absolutely terrifying,” Kristin Dossett, a resident of Palmer, Alaska, told CNN.
It was the most violent quake she felt in her 37 years in a region where temblors are common, Dossett said. One aftershock moved her piano a foot and half from the wall.
“It shook like I have never felt anything shake before,” she said.
“It just didn’t stop. It kept going and got louder and louder, and things just fell everywhere â€” everything off my dressers, off my bookcases, my kitchen cupboard. Just broken glass everywhere.”

– An employee walks past a damaged aisle at an Anchorage True Value hardware store.
– View VIDEO, photos and more news here via CNN.com