Home > News > 55 million Americans could be affected b...

55 million Americans could be affected by Irene 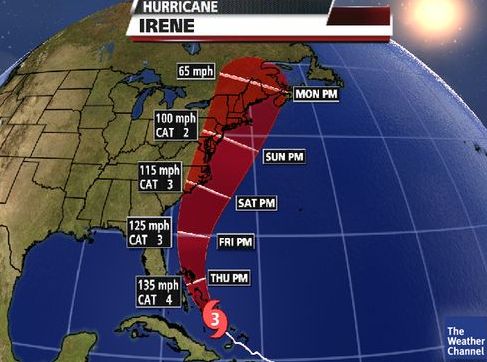 When meteorologists look at what path a hurricane or tropical storm may take, we investigate the overall synoptic weather pattern. The term synoptic refers to the large-scale atmospheric features in play that will ultimately dictate where a hurricane will go.

The graphic below shows the overall synoptic pattern for Hurricane Irene through the middle and late portion of this week. Over the Atlantic is a large high-pressure system aloft and to the west over the south-central states is another upper-level high. In between these two large high-pressure systems is a break which provides an alleyway northward for Hurricane Irene.

This alleyway is caused by disturbances aloft moving through the jet stream near the Canadian border. some of these disturbances are rather subtle, while others are easy to diagnose.

Late Week Jet Stream Dip
Below is a computer model forecast of the upper-level pattern for Thursday. It essentially matches the image above with the bookend high-pressure systems and the break in between.

I’ve marked with a red line a dip in the jet stream which will reinforce this break late in the week. This will pull Irene on a more northerly heading through time.

After the large dip in the jet stream exits and leaves Irene behind, the alleyway northward remains wide open. The question is exactly where will this alley line up. This is dependent on how much the western Atlantic high-pressure system is eroded.

Also in play are the timing and amplitude of more incoming disturbances aloft in the jet stream near the Canadian border. Will these be subtle enough and have only a small influence on Irene’s path? Or could they play a role in eventually guiding Irene to some extent by nudging the system a bit farther east or allowing a more westward track along our projected path?

These subtleties in the overall synoptic pattern will hopefully be ironed out soon.

Millions in Irene’s “Alleyway”
Regardless of how the overall pattern unfolds in the coming days, the point is that an alleyway exists for Irene to eventually head northward. It just so happens that this alley lines up right along the East Coast of the United States, potentially putting millions of people in Irene’s path.

As you can see on the graphic below, 55+ million people could be highly impacted from Irene. See our threat level graphics for more information at this link.

– Our thanks to our friends at Weather.com (The Weather Channel) for the extensive information