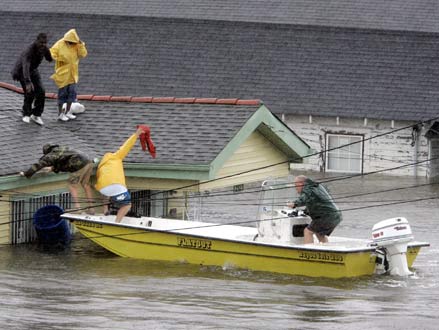 Five years ago, the family had never seen a cactus up close. Mexican food meant Taco Bell. And the phrase “dry heat” would have been absurd. Back then, of course, they had never lived anywhere but Louisiana.

Floodwaters from Hurricane Katrina pour through a levee along Inner Harbor Navigational Canal near downtown New Orleans, a day after Katrina passed through the city.
(Image credit: The Associated Press)

They arrived in Arizona a week after Hurricane Katrina struck, one family among the thousands of storm evacuees flung across the country in search of sanctuary. Thomas was 36 years old, with six children and her longtime boyfriend, Doyle Smith, by her side, and her mind revving with questions.

Where would they live and work? When, if ever, would they go back home? What might they find when they did? Blank pages of a life story that suddenly had to be rewritten.

Five years later, the family’s story has new chapters — marked by more loss but also many achievements, by tough times but also the generosity of strangers.

“Katrina?” says Thomas. “I try to leave it in the recesses of my mind. Way back there.”

Satellite image of Katrina as it passed near New Orleans.
(Image credit: NASA)

They survived by taking refuge in the attic of their four-bedroom brick house: Thomas, Smith and all six children, huddled together: Kayleigh, 15; Kourtney, 13; Larry, 12; Annalyce, 6; Andrew, 5; and 3-year-old Angela.

After 11 hours, Smith heard a boat outside and used a hammer to break through the roof. They eventually made their way to an evacuation staging area and boarded a government plane out of town — to where they didn’t know until the pilot announced: “The beautiful sun city of Phoenix, Ariz.”

Weather.com today has extensive coverage of Katrina – what happened on that day and what has happened since.  Go to www.weather.com for full coverage.

Still get cold shivers looking the the images. I knew someone there at the time.
The before and after images are impressive!