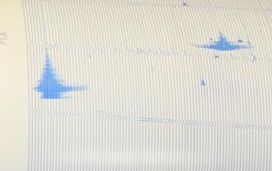 A magnitude 5.9 earthquake this morning was felt widely across the North Island, causing many people to leap out of bed.

GNS Science said the quake was located 30 km north of Taupo at a depth of 150 km.

It struck at 4.02 am and was widely felt across the North Island, with GNS receiving reports it was felt as far north as Auckland and as far south as the Marlborough Sounds.

GNS Seismologist Bill Fry told Radio New Zealand the quake would have been felt as far south as Ashburton.

He said the quake was unlikely to have caused much structural damage to buildings.

“As the energy travels from (150km) depth to the surface it loses a lot of its punch,” he said.

“It wasn’t a huge earthquake…you’d expect maybe some dishes or articles inside the house to fall over, maybe pictures might fall off the walls but we don’t expect any structural damage.”

Mr Fry said the tremor was significant but should not cause panic, and while aftershocks could be expected they should not be anything to worry about – although he added you could never be sure.

“As a general rule of thumb with an aftershock sequence you can expect one event that’s one magnitude less than the main shock.

There were reports on social media that some people could hear the earthquake coming.

The quake was strong enough to get people out of bed and lots of comments were flowing on sites such as Twitter.

“Someone’s just had a sizable quake. Felt strongly in Napier. Anyone else get the shakes?” wrote Mark Bramley.

A Fire Service spokesperson said there had been no call-outs or reports of damage following the earthquake, although GNS Science received a report from Havelock North that the quake had been “slightly damaging”.

The quake followed a 3.5 magnitude quake at 6.19pm yesterday, centred 40km east of Taupo at a depth of 5km.

Definatly felt strongly here in Havelock North, although that ‘slightly damaging’ report seems a bit exaggerated. From what ive heard seemed to be felt stronger here than it did in places closer to the epicenter

I remember waking some time this morning – it was still dark, and I could hear a low rumble and felt the bed vibrate slightly. I remember wondering if it was a plane or an earthquake, and making a note to check GeoNet. No idea what time it was. I’m in Auckland, and have never felt a quake before. So not sure if I felt it or not, but it was weird.