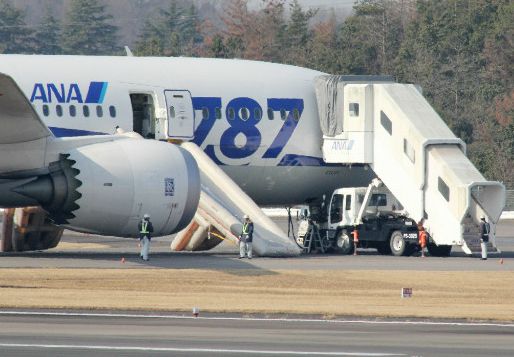 An All Nippon Airways 787 Dreamliner was held in Tokyo after a mechanical problem, the fourth such incident for Dreamliners in 10 days.

The plane was delayed Thursday (Friday NZT) after a cockpit message indicated a problem with the power supply to its air-conditioning system.

More than 100 passengers who were supposed to fly to Frankfurt departed on a different plane eight hours after the scheduled departure time, ANA said.

Earlier this week, a Denver-bound United Airlines Dreamliner was diverted back to Houston after a problem with its brake indicator.

A week before, two United Dreamliners made unscheduled landings.

A flight from Denver to Tokyo was diverted to Seattle because of an indicated problem with its oil filter.

And a Houston-bound flight from London made an unscheduled landing at Newark’s Liberty International Airport due to a “low oil indication.”

In each case, the plane landed without incident and with no passenger injuries, Boeing said.

The incidents come six months after the Federal Aviation Administration and other officials grounded the Dreamliner worldwide due to troubles with its battery system.

“The 787 is a great airplane and we know it will continue to receive heightened attention when reliability events occur in service,” Boeing spokesperson Yvonne Leach said Sunday.

The entire global fleet of 50 Dreamliners was grounded in January after two battery overheating incidents triggered concerns among safety officials.

Among the Dreamliner’s innovative designs is a battery system that uses new, lightweight lithium-ion batteries.

In April, the FAA ordered all 787 operators to make specific modifications. United has been flying its fleet of six 787s since May 20.

United is the sole U.S. operator of the airplane, which boasts high fuel efficiency due to the lightweight carbon-composite materials used in its wings and fuselage.

In an apparent show of confidence in the new airliner, United announced Tuesday that it’s ordering 20 additional Dreamliners, specifically the 787-10 model, a longer version of the plane.

The plane represents a new generation of efficient wide-body, long-range aircraft, helping to make it among the world’s most heavily scrutinized aircraft.

Airlines worldwide have committed to buying the plane, and hundreds of millions of dollars are riding on Dreamliner’s success.

On June 14, Boeing rival Airbus flew a similar airliner, its highly anticipated A350 XWB, for the first time at its facility in Toulouse, France.