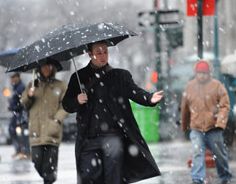 A major winter storm will continue to wallop the Northeast on Friday, a day after heavy snow closed schools, roads and caused dangerous conditions.

Parts of New York could get as much as a foot of snow Friday. The storm is the third blizzard to hit the area in a month.

“The heavy wet snow will be sufficient to bring down trees and power lines and could also cause roof collapses,” the National Weather Service said.

A snow-covered tree limb fell in Central Park on Thursday, killing a 46-year-old man. New York City’s Parks Department warned residents to stay out of city parks after the incident.

Parts of New York had received from 55 to 75cmss by Friday morning NZT, the Weather Service said. Massachusetts was averaging 55cms across the state. Parts of Pennsylvania had as much as 12 inches. Areas in Vermont received as much as 1 metre of snow.

The latest wintery blast hasn’t yet wreaked as much havoc as did February’s two earlier blizzards. Power companies in the New York area were reporting few outages.

But for some, any more snow was just too much.

“I’ve just been shoveling,” a weary man told CNN-affiliate WBRE. “And it looks like I’ll be doing so more shoveling.”