3 stormy systems this week & No 2 is on Wednesday 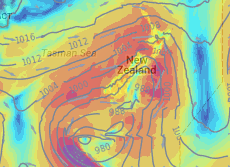 Autumn is finally truly here with changeable weather every day or two and more blasts of severe weather in the mix.  Thunderstorms, gales and fairly mild temperatures are another sign we’re getting into the more ‘meaty’ part of Autumn.

This week is a busy week after a month of fairly lazy weather.  There are three stormy systems coming at New Zealand this week; Monday, Wednesday and Friday.  Friday’s storm is being generated by a deep low in the Southern Ocean that will cross and move up the country over the weekend.

It means both good and bad news. The good is that it finally brings rain into regions that the Ministry for Primary Industries is monitoring closely, like Canterbury, Otago, Marlborough, Wairarapa and Central Hawkes Bay.  It will also drive in rain to dry parts of the North Island, such as western Northland, Auckland, parts of Waikato and the Taupo area – although some of last night’s torrential downpours have helped Waikato.

The bad is that this setup can bring severe weather which could create localised flooding, wind damage & even lightning & tornado strikes across several regions in both islands.

WHAT TO EXPECT WEDNESDAY:
The next system is moving faster than Monday’s front so it will race into the West Coast overnight tonight and in the early hours of Wednesday morning. Downpours may be torrential and squally with the chance of thunder and even a small tornado.  Hail is also possible along with gales.

The western and northern North Island gets it only a few hours later, across Wednesday morning, bringing a burst of heavy downpours, strong winds and maybe a rumble of thunder before clearing into eastern areas for the afternoon. A small, brief tornado is also possible from the stormy weather coming off the Tasman Sea along the western coastline, but please note we expect these to be at the smaller end of the scale.

By Wednesday night and into Thursday morning expect showers to be confined to the western coastline, some heavy in the North Island, with blustery westerlies.

We’ll have more information about Friday’s storm on Wednesday – but WeatherWatch.co.nz has been highlighting this low for a week now as being the most significant part of our weather this week. Why? It will not only bring in over 24 hours of heavy rain, heavy showers & strong to gale force winds (and some thunder) across many regions nationwide, but it will also bring a very cold southerly behind it – which will allow for freezing temperatures and snow on the dry, warm ski fields.  It will also reset temperatures to ‘normal for May’ in many places – in fact even below normal in some exposed areas to the southerly flow.