3 lows coming over next 10 days 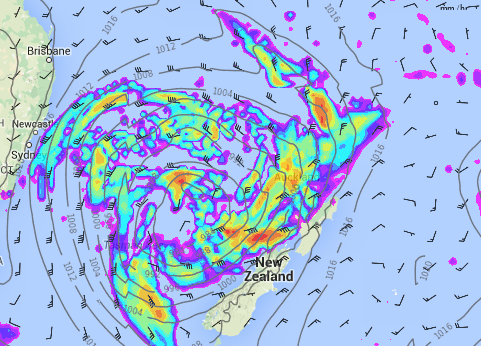 We may be in winter but the weather pattern looks more like autumn according to WeatherWatch.co.nz as we enter yet another record challenging warm week this week.

The placement of the air pressure system means sub-tropical northerlies are likely across a number of regions over the coming days pushing temperatures above average.

While a big low in the Tasman Sea will brush New Zealand, a direct hit is unlikely from this first low.

However the one behind it may make a more direct hit with New Zealand – bringing another burst of warm sub-tropical air and heavy rain.  The centre of this low is likely cross central New Zealand this Sunday and Monday bringing wind, rain and above average temperatures.  The wet nor’easter may even bring in some rain to dry east coast regions of both islands.

Low number three comes in around June 30th and this one is more uncertain – it may be a small sub-tropical low brushing northern New Zealand, or it may grow larger and bring in more rain.

In fact as we head into early July the general air flow around New Zealand is a westerly quarter one (which is more like Autumn).  We may see more smaller lows forming in this westerly and crossing the country.

In a nut shell WeatherWatch.co.nz sees the rest of June as changeable, warmer than average for the most part, with wettest weather in the north and west of both islands.