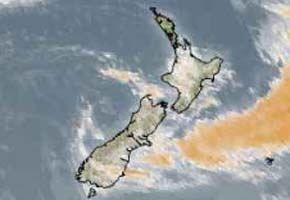 Thunderstorms arrived on the west coast of the North Island just south of Auckland through to about Te Kuiti around midday today.

A report of great lightning, intense rain and hail up to 2cm in size has come in from Simon Williams who was in the Hampton Downs area as it moved through. Unfortunately or fortunately depending who you talk to the storms weakened a fair amount after making landfall although areas of heavy rain have continued to move east.

Taranaki overnight around 1am looks to of got a lot of lightning, would have been an exciting time that’s for sure. I saw a report of a tornado in Taranaki from last night and it is possible however it could well have been strait line winds which are a different phenomena often associated with thunderstorms and can mistakenly be reported as tornadoes here in New Zealand.

The weather is quite unsettled around the country today with mostly cloudy skies and showers here and there, although sunny breaks are appearing in places. Rain or showers currently hugging more coastal areas in Canterbury should become more widespread later this afternoon or evening. On the West Coast of the South Island, south of Greymouth sunny spells are expected do gradually develop this afternoon.