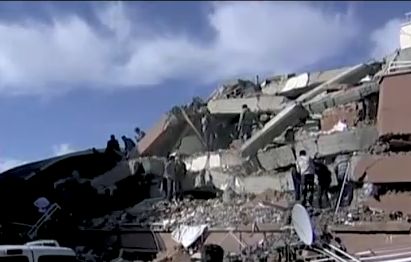 The death toll has risen to 279, with another 1,300 injured, Turkey’s semi-official Anatolian news agency reported, citing the country’s disaster management authority. Some 970 buildings are demolished.

There have been conflicting reports about the number of dead, however. Interior Minister Idris Naim Sahin said Monday that as many as 264 people were dead, while Deputy Prime Minister Besir Atalay put the death toll at 239.

It was difficult to tally the number of injured, Health Minister Recep Akdag said, because many were being treated and released.

The military was assisting with search-and-rescue efforts, Atalay said.

Numerous aftershocks — the largest a magnitude 6.0 — rattled eastern Turkey, one of the nation’s poorest areas.

Turkey earthquake damage ‘massive’ A health services building also collapsed, along with part of a hospital, CNN sister network CNN Turk reported. The injured were being treated in the hospital’s garden.

She said many residents are not returning to their houses, opting instead to sleep on rooftops or in the streets. It was not clear whether their homes were uninhabitable or they were just too frightened. Electricity and natural gas were off in most of the city, but Atalay said officials hope to restore power in Van and Ercis by Monday night.

Trucks carrying medical aid and food were seen driving into Van. But rescue teams had not reached some of the smaller villages in the area, Mengu said.

One man, stuck in the fetal position under a large piece of debris, was visible only through a small hole in the rubble. The man appeared weak and exhausted after rescuers pulled him out, his clothes torn.

At one point, rescue workers halted operations to try to hear whether anyone was knocking for help.

The Red Crescent called for rescue workers, machinery and drinking water. A crisis center was set up by the country’s Health Ministry in the Turkish capital of Ankara.

By Monday, more than 2,300 emergency personnel were in the region, Atalay said. Tents and rescue teams have come from as far away as Iran and Azerbaijan.

The crisis center said Sunday that 29 surrounding towns had sent help and medical helicopters were taking the injured for treatment in other provinces. Thirty-seven patients were taken to Ankara, Atalay said Monday.

Two tent hospitals were being set up in Ercis on Sunday, and two cargo planes were dispatched from the capital carrying medical teams and aid.

Erdogan and Akdag arrived in the area Sunday, according to the Ministry of Health’s crisis center.

Israel offered Turkey “any help it may require” after the earthquake, Defense Minister Ehud Barak’s office said. Israel and Turkey, once close allies, saw a deterioration in relations in a dispute over an Israeli naval commando raid on the Gaza-bound ship Mavi Marmara, in which nine Turkish activists were killed.

A spokesman for the Turkish Foreign Ministry said the country, while grateful for offers of aid, is prepared to handle the disaster on its own.

Turkey is “no stranger to having these seismic events,” but Sunday’s quake is considered major, CNN Meteorologist Reynolds Wolf said.

A magnitude-7.6 earthquake in Izmit, Turkey, killed more than 17,000 people in 1999, according to the United States Geological Survey. A magnitude-7.2 tremor in Duzce the same year killed 894 people, the agency reported.

Sunday’s major quake struck at 1:41 p.m. local time and was centered about 12 miles from Van, the agency said.

Looks like there is no OSH to impede people rescuing victims in Turkey.