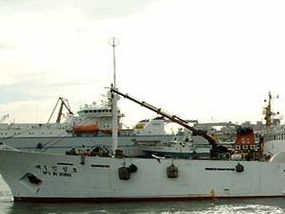 Hope is fading for 17 missing fishermen after a South Korean trawler sank in the Southern Ocean, claiming at least five other lives.

Three Korean fishing vessels continued to search for the men overnight and a decision on whether to continue the operation will be made this morning.

The boat sank in international waters but was in New Zealand’s search and rescue region – meaning the Rescue Co-ordination Centre New Zealand (RCCNZ) controlled the search for the No.1 Insung vessel.

Two New Zealand fishing boats working for seafood company Sealord were called to assist with the rescue of the 42 sailors, but were later stood down.

Five of the sailors’ bodies have been recovered, 20 have been rescued and 17 are still missing. But hopes are fading for the missing men, who would not have survived more than 10 minutes in the water.

RCCNZ search and rescue controller Dave Wilson yesterday said it was not known what caused the vessel to sink or why no distress communication was received before it went down.

The rescue vessel and fishing company said the boat sank quickly and those able to abandon ship jumped directly into the water without lifejackets or immersion suits.

“At the moment everyone is focusing on saving as many people as possible and finding all those who are missing. Causes can be worked out after,” said an RCCNZ spokesman.

The owners of the ship said the boat may have collided with an iceberg.

“The boat sank in about 30 minutes. We are trying hard to find the reason why it sank so quickly,” he told AFP.

“We believe the vessel might have been hit by an iceberg or a strong wave, although we have yet to secure any evidence of this. We are now collecting information from the surviving crew.”

The 58m longliner sank about 6.30am yesterday 2700km southeast of Bluff.

Eight South Koreans, eight Chinese, 11 Indonesians, 11 Vietnamese, three Filipinos and one Russian were on board.

The dead included two Indonesians, one South Korean and one Vietnamese, a Foreign Ministry official said.

The 20 rescued men are on board the fishing vessel No. 707 Hongjin and are reported to be in a comfortable condition, with none requiring medical treatment. The five deceased are also on board.

Searchers considered calling in an Air Force Orion to help at one point, but it would have taken at least eight hours to get to the area from the time it left New Zealand.

“Unfortunately, given the short survival times in water of those temperatures and the length of time it would take for the Orion and Hercules aircraft to reach the search area, it was not a viable option,” Mr Wilson said.

There is a light westerly at 10 knots and a 1m swell in the search area today.

“That’s our highest and most serious alert for search and rescue operations. It means it’s very serious.”

It is the second time this year a Korean fishing vessel has sunk quickly, resulting in deaths in waters near New Zealand. In August six men died and 45 were rescued after their boat sank in just 15 minutes in calm waters 400 nautical miles from Dunedin.