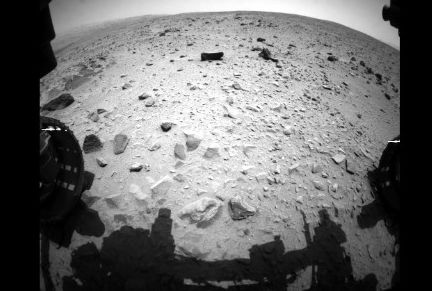 Life on Mars?  That’s the question facing the NASA team responsible for putting together the objectives for 2020 rover mission to Mars.

“We’re still on the quest to answer the grand question: Is there life somewhere else in the universe?” John Grunsfeld, NASA’s associate administrator for science, told reporters Tuesday in a teleconference.

Previous missions to Mars have found definitive signs that water once flowed in a crater and rock samples that show signs of clay minerals.

“We really needed to go back to the surface, and go to the next stage. … Did Mars ever have life?” Grunsfeld said as he previewed a 160-page report prepared by the Mars 2020 Science Definition Team, a group assembled by NASA to outline the objectives of the mission.

The 2020 rover mission to Mars is considered essential to meeting President Barack Obama’s challenge to send a manned mission to the planet in the 2030s.

Among the objectives of the 2020 rover mission will be the search for signs of life, the collection of samples to possibly be returned to Earth and testing technology that may allow for a manned mission to Mars.

“We want to be able to seek signs of life: Had life been there, did it leave a mark?” said Jack Mustard, a member of the development team and a chair and professor of geological sciences at Brown University.

As part of the preparation for the mission, NASA plans to conduct an open competition. It is planned by NASA for the space technology and scientific instruments that will be carried by the rover and used in the mission, according to the report.

In addition to the 2020 mission, NASA is scheduled to launch the Mars Atmosphere and Volatile Evolution mission in November 2013. That mission is set to explore the compounds of the Martian atmosphere, which scientists say will offer a glimpse into the planet’s climate and habitability.

In 2016, a collaboration between the European Space Agency and Russian Federal Space Agency is expected to launch an ExoMars Trace Gas Orbiter — a mission to map methane and other gases on Mars.

The European and Russian space agencies plan to launch the ExoMars rover in 2018.

“What we have over the next 10 years is a very comprehensive series of international missions to Mars,” said Jim Green, director of NASA’s Planetary Science Division in Washington.