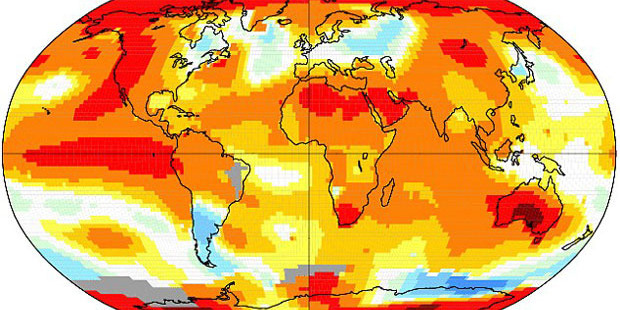 Global temperatures have already smashed records this year, and now meteorologists are warning 2016 will be even hotter.

The annual global temperature forecast from the Met Office suggests 2016 will be between 0.72C and 0.95C above the long-term average of 14Â°C.

Man-made global warming, along with a smaller effect from the natural El NiÃ±o phenomenon in the Pacific, are expected to push temperatures towards record levels next year.

Professor Chris Folland, from the UK’s Met Office, said: “2015 is on track to be the warmest year on record, and this forecast suggests 2016 is likely to be as warm, if not warmer.”

The latest data for 2015 suggests it is 0.72C above the average, making it the hottest year on record.

With 2014 also one of the hottest on record, Professor Adam Scaife, head of long range prediction at the Met Office, said: “This forecast suggests that by the end of 2016 we will have seen three record, or near-record, years in a row for global temperatures.”

The Met Office said it does not expect the record-breaking run to continue indefinitely, but it shows how global warming can combine with smaller, natural fluctuations such as El Nino to push the climate to unprecedented levels of warmth.

Experts previously warned global average surface temperatures in 2015 are likely to reach what they call the ‘symbolic and significant milestone’ of 1C above the pre-industrial era.

WMO director-general Michel Jarraud believes El NiÃ±o may be responsible for 16 to 20 per cent of the rise, and longer-term averages show temperatures rising regardless of El NiÃ±o or its cooling counterpart La NiÃ±a.

El Nino, a naturally occurring weather pattern marked by warming sea-surface temperatures in the Pacific Ocean, causes extremes such as scorching weather, droughts and flooding around the world.

Meteorologists expect El NiÃ±o to peak between October and January and to be one of the strongest on record.

A preliminary estimate, based on data from January to October, showed the global average surface temperature for 2015 was around 0.73C above the 1961 to 1990 average of 14C and around 1C above the pre-industrial 1880 to 1899 period.

“This is all bad news for the planet,” Mr Jarraud continued.

“The world’s ten warmest years have all occurred since 1998, with eight of them being since 2005,” the WMO said.

Next year may be even warmer – levels of greenhouse gases in the atmosphere have risen to a new record every year for the past 30 years and El NiÃ±o is likely to continue into 2016.

“The year whose annual mean temperature is likely to be most strongly influenced by the current El NiÃ±o is 2016 rather than 2015,” the WMO concluded.