2014 weather in review: Near average temperatures and rainfall 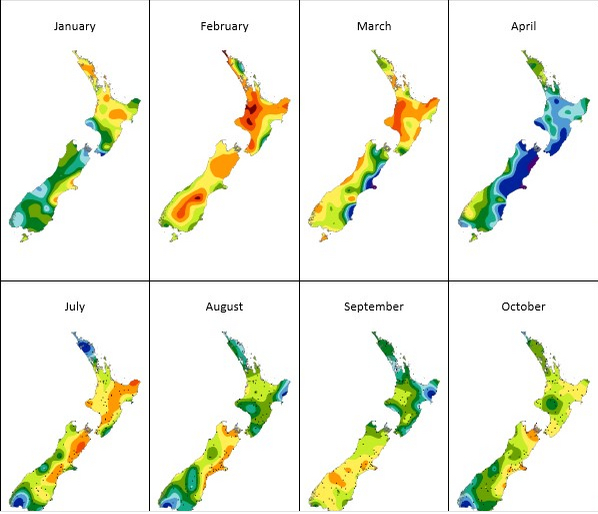 2014 was a year of averages, according to the newly released nationwide climate data – both for rainfall and temperatures.

The National Institute for Water and Atmospheric research has released statistics from the last 12 months, detailing rainfall, sunshine, temperature and soil moisture readings – and the findings may surprise you!

Annual temperatures were near average across much of the country.
However, above average annual temperatures were recorded in isolated locations in the Bay of Plenty, Gisborne, Taranaki, Wairarapa, Westland and Central Otago.
Notably, New Zealand observed its equal-warmest June on record (based on NIWAâ€™s seven-station series which begins in 1909).

From late-summer through to mid-autumn soil moisture levels were lower than normal in many parts of New Zealand, including western areas of Northland and Auckland, central and western Waikato, eastern Bay of Plenty, Taranaki, Manawatu-Whanganui, Tasman and the upper West Coast.

At the end of the year soil moisture levels were below or well below normal across Waikato, lower Hawkeâ€™s Bay, Wairarapa, and along and east of the Divide in the South Island.
Above normal soil moisture levels were evident over parts of the upper West Coast of the South Island, northern Gisborne, coastal Bay of Plenty, much of the Coromandel Peninsula and central and eastern areas of Northland.

For the full report, and a month by month summary of 2014’s weather, you can head here.