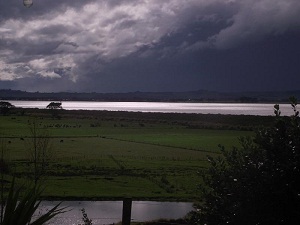 Across the globe, this year as seen some amazing and terrifying weather extremes.

Here in New Zealand, we have seen our share of wild weather too.

Tornadoes struck several times.  In May, 37 year-old Benedict Dacayan was killed when a 200km/h twister ripped through the North Shore.  14 others were injured.

The Kapiti Coast was hit by tornado in July landing one woman in the hospital.

Wellington had 11cm of snow fall in August.  Auckland saw some of the white stuff too, for the first time since the 1930’s.

It’s not exactly weather related, but you can’t talk about the last 12 months without talking about the earthquakes.  August’s polar blast hit Chirstchurch especially hard as residents were still struggling with the devistating quake from 22 February.

The flooding in Nelson two weeks ago, which prompted a state of emergency and evacuations.

And now it looks like 2011 will go out with a little more wild weather.

The good news is that the winds from what’s left of Fina will probably stay below severe limits.  They could still be pretty strong though.  I think the rain is the biggest concern at this time.  Among the concerns are; localised heavy rain fall could cause rapid flooding in low-lying areas and possibly slips in areas prone to them.

We will have a more detailed look at the latest on this potentially significant event coming up this afternoon.

Story by WeatherWatch.co.nz and NZHerald.co.nz