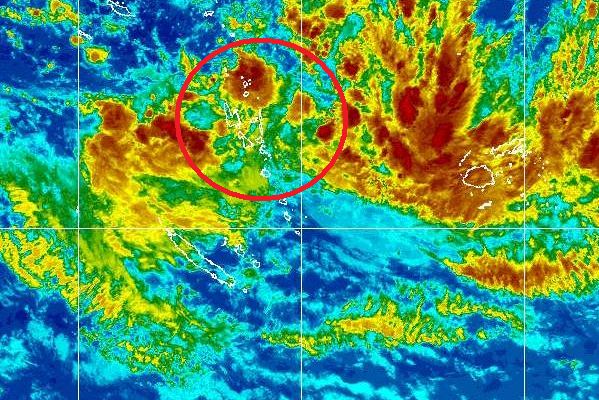 The first Tropical Depression of the South West Pacific Cyclone season has formed over Vanuatu and meteorologists say there is a “moderate” chance it could turn into a Tropical Cyclone.

The Fiji Meteorological Service says “moderate” means a 20 to 50% chance.  WeatherWatch.co.nz estimates the chances as being closer to 20% than 50% with this particular depression, based on long range computer models.

See below for full maps and details…

However the low may produce localised stormy weather about Vanuatu and prolonged heavy rain and thunderstorms for the next three days.

The depression is currently named TD01F.  If it becomes a tropical storm (meaning it’s one up from a tropical depression with sustained winds at gale force, or 62km/h) it will then be given a name.

Thunderstorm activity appears to have increased recently over the South West Pacific – the building blocks of Tropical Cyclones.

Image:  The blue indicates a snap shot of thunderstorms at one moment in time today in our part of the world.  Image / University of Washington

Potential cyclones:
An area of low pressure over the northern Coral Sea, southeast of Papua New Guinea, is moving in an easterly direction and is expected to be out of the region by Saturday.

The Fiji Meteorological Service says there is a moderate chance of a cyclone developing over Vanuatu from TD01F on either Friday, Saturday or Sunday.

Beyond that no forecast is given however WeatherWatch.co.nz believes the low, which will hover over the area until Sunday, will slowly drift south east out of the region on Monday and will unlikely reach tropical storm strength.

Weather models used by WeatherWatch.co.nz believe the TD01F will track south east on Monday out of the tropics and into the sub-tropics.

By Wednesday it will approach New Zealand’s northern regions, such as Northland, Auckland, Coromandel Peninsula and potentially Bay of Plenty, East Cape and Gisborne.

We have low confidence the depression will be of storm strength by the time it reaches New Zealand around Wednesday or Thursday next week.  We have moderate confidence that the low will bring rain to dry parts of northern New Zealand, particularly Northland judging by the latest computer models issued by ECMWF.

Map shows TD01F moving out of the sub-tropics and towards the upper North Island next Wednesday/Thursday.  However a strong high over the South Island will limit any impact.  Map / ECMWF.

What is this page?

For the first time in New Zealand we’ve combined data from Cyclone Centres in Australia and Fiji along with long range weather maps created by various offshore organisations, both public and private.

We hope you’ll find the information on this page interesting to follow.

Do you have interests in the South West Pacific?

See below for the official cyclone centres in Australia and Fiji – we advise you use these sources if you have interests in the Tropical South West Pacific.

Please note, this is a new service provided by WeatherWatch.co.nz – we will update at least once a week, possibly more often as the cyclone season gets underway

This is what I love about WeatherWatch, we can rely on you to give us info on future weather scenarios.

A very interesting read, hope the rain reaches the waikato 50 – 100mm is desperately needed here, grass starting to burn up

Hey keep up the fantastic work love the new background an all the maps an info about latest stuff very very good , doing a great job mate keep it up . Daniel