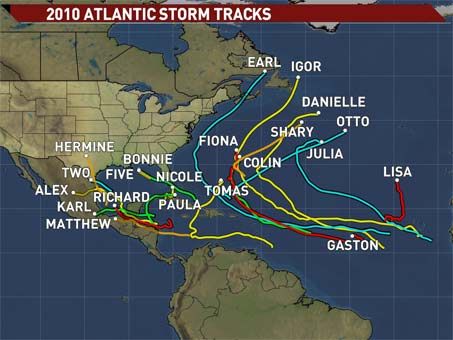 Weather.com  –  The Colorado State University Hurricane Forecast Team has recently released its findings on the 2010 hurricane season.  One word can sum it up: ACTIVE.

Several forecasting agencies, including CSU, predicted an above-average season and Mother Nature did not let them down.

Observed in total were 19 named storms, including 12 hurricanes; five of which were major hurricanes.

With such an active season, you might be wondering about U.S. landfalls.  Incredibly enough, no hurricanes made landfall along the Gulf Coast, the Florida peninsula or the East Coast. (Hurricane Alex had impacts on Texas but made landfall over northeastern Mexico)

This was a season that had plenty of bark but fortunately very little to zero bite.

Below you’ll find some of the notable and intriguing landfall statistics (in bold) from this 2010 hurricane season provided by Colorado State University.

Only one tropical storm made U.S. landfall this year (Bonnie). We have not had a hurricane landfall since Hurricane Ike in 2008. The last time that the United States went two years in a row with no hurricane landfalls was 2000-2001.

Only three tropical storms have made landfall over the past two years. The last time that three or fewer tropical cyclones made landfall in any consecutive two-year period was 1990-1991.