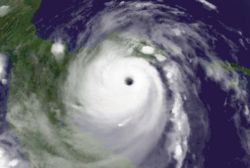 The 2010 Atlantic Hurricane season, one of the most widely covered storm seasons in the world, kicks off today, June 1st.

This year the National Oceanic and Atmospheric Administration (NOAA) is predicting an “active to extremely active” hurricane season in the Atlantic Basin.

“If this outlook holds true, this season could be one of the more active on record,” said Jane Lubchenco, Ph.D., under secretary of commerce for oceans and atmosphere and NOAA administrator.

“The greater likelihood of storms brings an increased risk of a landfall.”

The last time a season of this nature was predicted was during Hurricane Katrina, which was a record breaking year.

With the threat of a major storm any day now, it puts even more pressure on BP to plug the oil leak spewing gallons of oil every day into the Gulf of Mexico.

So far, the weather has been mostly settled allowing clean up workers to scoop the oil from the sea.

Now while some fear a hurricane could make matters worse, America’s National Hurricane Centre says “The high winds and seas will mix and “weather” the oil which can help accelerate the biodegradation process”.

However, a hurricane in the area would also means those trying to plug the leak would have to evacuate, meaning several days of delay.

NHC says the high winds created by a hurricane may distribute oil over a wider area, but it is difficult to model exactly where the oil may be transported.  “Movement of oil would depend greatly on the track of the hurricane”.  They say depending on which side of the slick a hurricane moved in from could either push the slick towards the coast, or completely away from it.