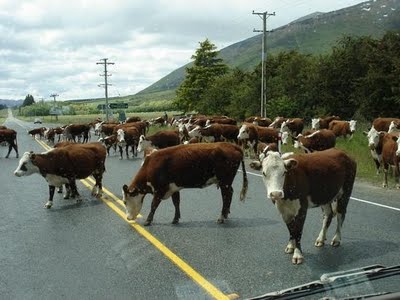 2006 was most noteable for its extreme weather events. There was hardly a part of the country that wasn’t untouched by some sort of dramatic event.

Tornadoes, snowstorms and heatwaves all occurred over that 12 month period and it left many Kiwis wondering what the heavens above might deliver next.

The major event of the year was the severe and quite unexpected snow storm that affected Canterbury and Otago in June.

Courtesy of NIWA the following is a breakdown of the year month by month..

The year began with significant soil moisture deficits in the north and east of the North Island and eastern South Island, which persisted in these regions until March. A 3–day heat wave in Central Otago with temperatures reaching 36°C occurred at the end of January.

March was cold, and an ex-tropical cyclone produced high rainfall in the north of the North Island.

Flood-producing rainfall events occurred in north and east Otago and in the Hauraki-Coromandel region during April. As a result the month’s rainfall was very high in these regions. Rainfall in north and east Otago totalled 300–400 percent (three to four times) of normal, and totals in the Hauraki-Coromandel region were at least 200 percent (two times) of normal. It was the 8th warmest April on record. May produced well above average rainfall in the north of the North Island, and east of the South Island, with low rainfall in parts of the south of the South Island.

Two severe winter snowstorms accompanied by bitterly cold conditions, and later heavy frost contributed to a particularly cold June. Temperatures were 2°C below average in some regions. It was much sunnier than normal in all western and southern regions, with record high June totals in the north of the North Island, and coastal Otago.

In contrast, July was warmer than June, going against the usual trend. It was very wet in the south and west of the North Island, with twice the normal rainfall in Wairarapa with flooding. July was rather settled in other areas with rainfall totals a mere 25 percent (a quarter) to 50 percent (half) or less of normal in the north of the North Island and Otago.

High rainfall continued in August in the south and west of the North Island, but it was dry in much of the South Island, and extremely sunny in the south.

September was a month of climate extremes with record low rainfall and high mean temperatures at many locations. Rainfall was low throughout much of New Zealand, especially in the east with some locations recording 10 percent (one tenth) or less of normal rainfall. In some areas temperatures were 2°C above average, with windy conditions in the south.

It was windier than usual over most of the South Island and southern half of the North Island in October with several locations in Marlborough and Otago recorded their windiest October in over a decade.

November produced stormy westerlies over the South Island: it was particularly warm in the east of the North Island, yet cold in the southwest of the South Island. Significant soil moisture deficits existed in Northland and central Marlborough by the end of the year. December ended the year on a cool note, with one of the coldest Decembers in the last 60 years

2006 was the last year thus far of maximum lunar declination, always an extreme year, and on a 18.6 yr cycle. The stress built by max dec in 2006 saw very significant earthquakes the following year, being a 6.9mag in the east of the North island in December, within the biggest 25 ever recorded in this country, and a 6.7mag and 6.1mag in Te Anau. As well, in February 2006, central NZ received a 6mag. 2006 Also 2006 was in the top 50 years of averagely closest perigees, itself a cause of extreme events.

Years before and after 2006 also saw plenty of “extremes”. The way the term is getting used now, it has lost most of its meaning. More unusual now would be to find a “non extreme” year in that terminology. No way is the moon getting credit for 2006.

I’d take 2006 over 2011 here any old time. Jan & Feb were very sunny and summerlike, and the winter though wet at times was also sunny. I’d rather have “stimulating” weather than cloudy depressing conditions any time.