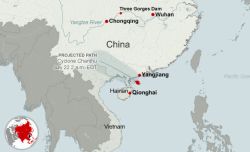 Chanthu, the third typhoon of the West Pacific season, slowed down Thursday as it made its way over land in southern China.

As the tropical storm drenched a region already inundated by heavy rain and deadly flooding, its top winds slowed to 100 kp/h.

It had made landfall in Wuchuan City in southern China’s Guangdong Province, the state-run Xinhua news agency said.

No casualties have been reported so far.

Torrential rains and flooding this year already have been the worst in a decade, claiming the lives of 701 people and leaving 347 missing, Xinhua said, citing government figures.

Chanthu could drench some rain-swollen areas with another 500mm of rain, said CNN meteorologist Jenny Harrison.

As the storm moves by, an area of particular concern is the region along the Yangtze River, which already has experienced the worst flooding in 30 years. Floodgates on the Three Gorges Dam have been opened to control the flow, and pictures from the scene show huge volumes of water pouring from it.

Throughout the country, floods have hit 27 provinces and municipalities, affecting 110 million people, according to Xinhua. It said more than 8 million people have been relocated.

About 287,000 military personnel have been mobilized in anti-flood operations, and schools are being advised to do what they can to ensure students’ safety.