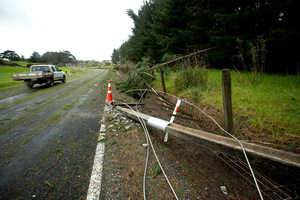 More than 1000 households remain without power in the Auckland region, as strong winds continue to whip through.

Vector said customers without power were those in areas that were difficult to access, or where network damage required extensive work.

Only 31 households in Muriwai were still without power, down from 481 households.

Four crews and two arborist crews were required to take trees out of lines and trim back other vegetation before repairs could be made. Crews continued working on outages and overnight, so long as working conditions are safe, said Vector, and their priority was to fix large outages first, then smaller area outages.

The strong winds and rain that have caused chaos in the north of the North Island are not done yet, and more bad weather is forecast across the country today.

A government issued severe weather warning remained in place for Northland, and Auckland north of the harbour bridge, and gusts of 120 km/h were possible in exposed places.

WeatherWatch said the wind was being generated by an anticyclone circling around an easterly high, which was pushing a strong north to northeast flow across the country.

As another low came in from the Tasman the whole country could expect more blustery winds, however the worst of the damaging winds was over, the forecaster said.

Auckland and eastern Waikato are set for another windy day, but the weekend looks calmer with winds set to ease over the upper North Island.

By Sunday afternoon most of the country should have lighter winds, although gusty conditions may continue to whip through exposed areas in both the North and South Island.

Looking ahead to next week, the North Island could expect some southerly winds, rain and showers, as a large area of low pressure was to develop, WeatherWatch predicted.

The South Island could expect clear skies and heavy frosts from a high pressure system coming in from the west.

By next weekend the bad weather would subside, and most of the country could expect more settled weather, WeatherWatch said.

I have a question regarding the winds circling this high pressure to the east of N. Z.

What is causing it to rotate so quickly?

Is it the winds from the low pressures on each side giving it a twirl?

Hear near Waipu I have recorded 75 mils rain to date with this weather event.

Winds have eased a bit this morning so fingers crossed the higher winds forecast don’t eventuate.

Hi Steve – the high is a fairly strong one, and the air pressure around it is all much lower (as you’d expect in winter with lots of lows and storms around/near NZ).  That means the air rushes around the high much faster – think of the isobars as lines on a topgraphical map – the high is a mountain, and it’s surrounded by valleys, some very deep. The area around Auckland is a very very steep part of the mountain…ride a bike down that part and you’ll speed up when the gradient gets steeper.   So, as a low moves in, like it did earlier this week – and again tonight – it puts more pressure on the high, creating this squash zone we have right now.    These gales don’t entirely circle either the low or the high – just where the isobars get squashed up.