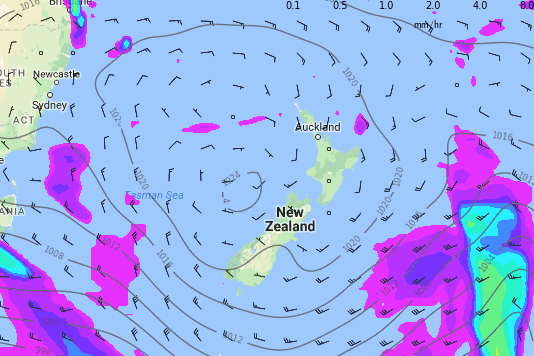 A few early light showers and morning clouds may greet some northern New Zealand regions as the front that brought rain to the West Coast yesterday completely disintegrates over the upper North Island.

A very large high pressure system (anticyclone) is spreading in from the Tasman Sea bringing light winds, mostly dry weather and fairly sunny to the country today. Make the most of it, another cold front approaches the South Island overnight tonight.

NORTH ISLAND:
Some early showers, mainly pre-dawn, along the western coastline. Winds turn sou’west behind it then fade out as the high rolls in bringing calm conditions and afternoon sea breezes to many. It’s a mild day for most areas but perhaps not quite as warm as Friday and Saturday were. Large sunny areas (which may take a while to develop for some regions due to that falling apart front).
Highs: 18 to 24 (only 13 around Ohakune)

SOUTH ISLAND:
Bit of a chilly start for some, especially in the south and inland a bit. Frosts are possible in the high country. Mostly Sunny for many areas with dry weather returning to the West Coast (but only for today, so make the most of it!). A little cooler today for most regions.
Highs: 15 to 22

– Happy Easter from the WeatherWatch.co.nz team!