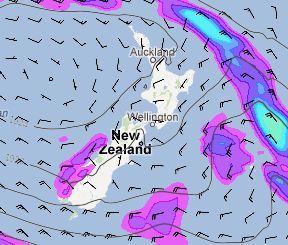 There’s no easy way to summarize the end of August except to say; it will be changeable.

Rain will fall on the Mainland’s West Coast and Nelson today.  A few chances for showers will pop up about the Bay of Plenty as well.

More widespread precipitation is expected across the country tomorrow.  Both islands are likely to see their fair share of rainfall.  Some brief heavy rain is possible about East Cape/Northern Gisborne, Taranaki, northern West Coast and Nelson.

On Tuesday, high pressure builds in off the Tasman.  That will bring rain chances to an end for a few days.  However, Northland residents could see some rain on early on Wednesday.  There will also be some small rain chances for Taranaki and Bay of Plenty late on Wednesday.

Rain chances will spread across the North Island on Thursday.  Wellington looks like it should stay dry, however.

Friday, the last day of the month, should be a fairly settled day.  Just a few shower chances for Auckland, Bay of Plenty, East Cape/Northern Gisborne.