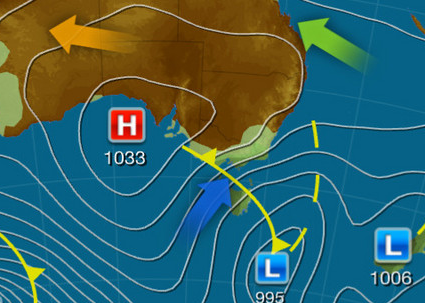 It’s going to be a chilly end to autumn in Australia’s southeast, with three cold fronts set to sweep through during the six days.

These fronts may become progressively stronger and the air in their wake increasingly cold.

The first and weakest front will cross Tasmania today, bringing showers and a temperature drop of about two-to-three degrees. The northern edge of this front will also clip Victoria and South Australia, causing a few showers.

Front number two will cross Australia’s southwest tonight before gaining strength over the Bight on Friday and Saturday morning. This system will cross the southeast from late Saturday and on Sunday, producing a burst of blustery winds, showers and snow. This front could bring the coldest weather since last winter to some areas.

Sunday is forecast to be the coldest day since last August or September in Victoria’s Warrnambool (12C) and Hamilton (11C) and South Australia’s Coonawarra (13C) and Naracoorte (13C). Canberra’s forecast top of 11 degrees on Monday would also be its coldest day in nine months.

The third and potentially strongest front of the series will move over Australia’s southeast on Tuesday and should bring showers, strong to gale force winds and more snow.

The procession of late-autumn cold fronts will deliver two bouts of alpine snow and also a dusting to lower-lying areas in Tasmania, Victoria, New South Wales and the ACT.

The heaviest snow will most likely to fall in western Tasmania and mountains on the mainland that are exposed to southwesterly winds. The lowest level snow during the next week will probably occur in the wake of the third system, on Tuesday and Wednesday.

A snowy end to autumn means we could enter winter with some natural snow on the ground at Australia’s ski resorts.