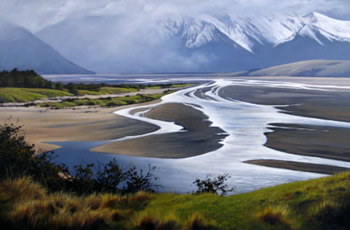 Rain and wind warnings continue to be in effect over much of the South Island again today but also the lower North Island has a risk of gales as well.

Heavy rain pelted down over parts of the South Island’s West Coast yesterday and similar conditions are expected today with possible thunderstorms.

Government Forecaster, MetService also has further wind warnings with gusts possible about inland areas of the South Island peaking at 140kph from the nor’west and also Wellington and Wairarapa looking at top gusts of 140kph tonight.

Northern and eastern regions of the North Island appear to have the best summer conditions today although it could become a little breezy in places.
Temperatures are likely to be in the mid to high twenties however the low thirties could be a possibility out east with nor’ west conditions.

The mercury dipped below par in Auckland during the early hours of this morning after a glorious day yesterday.
Temperatures dropped as low as 10 degrees overnight in some suburbs however Auckland airport stayed above 14 degrees for the most part.

It’s been a different situation in the south with Christchurch experiencing yet another very warm night.
Even this morning it’s a balmy 23 degrees at 6.30 and the reason is the nor’ west airstream maintaining its grip on the city and the region.

Rain has continued to fall on the Coast  and lower parts of the Mainland keeping temperatures in the mid teens and later today a cooler southerly could deliver some heavy showers with the chance of thunder as it slides up eastern areas of the South Island.