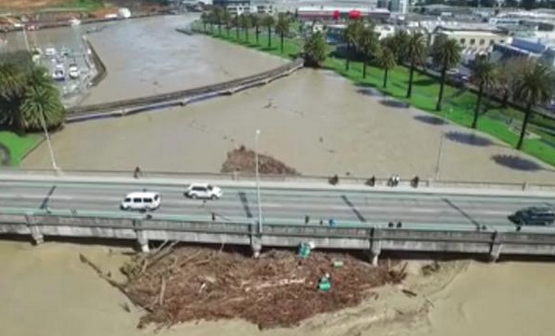 Gisborne was hardest hit, with 114mm of rain recorded in 24 hours, and floodwaters forcing the closure of State Highway 2 from Opotiki to Gisborne.

A second stretch of State Highway 2 was later closed from Napier and Wairoa after the highway flooded near the small settlement of Turiroa, and police advised all motorists to delay travel overnight.

A river of muddy water could be seen flowing through Gisborne yesterday, proving too much for the river banks, which burst in places, causing localised flooding.

Check out this Incredible Drone footage of the Gisborne flooding http://t.co/ltfX3RS2AE pic.twitter.com/DrFHEtkaFN

The isolated township of Te Karaka was completely cut off from Gisborne by flooded roads, causing farmland to swamp and authorities to consider evacuating residents.

Fortunately, the rain eased just in time and residents were allowed to stay in their homes.

A man had to escape from his car when it became engulfed by floodwater in Rototahi, south of Tolaga Bay, and civil defence helped residents to sand-bag their properties in Kaiti.

Tolaga Bay Area School and Te Karaka School closed for the day and Gisborne Civil Defence spokeswoman Sheridan Gundry said there was surface flooding across the district and a number of trees were down on roads.

The council said manholes had blown in Gisborne and sewage valves have been opened to relieve pressure and to prevent sewage flowing into properties.

The Hawkes Bay town of Wairoa was also badly hit as the day wore on, with some residents saying the Wairoa River was looking as high as it was during Cyclone Bola.

Wairoa District Council closed 18 roads in the region due to flooding, slips and debris from downed trees, and Patunamu Rd was impassable from debris from a forestry site being carried on to the road.

The Hikuwai River rose by a metre an hour throughout the morning and the Waimata River gauge at Goodwins reached 8.8m by mid-morning.

One flight from Gisborne Airport was cancelled because of the rain and strong southeasterly winds grounded planes in New Plymouth.

The weather was reported to have contributed to a number of crashes, with a fatal accident occurring between a car and a truck in Bay of Plenty’s Waimana Gorge about 2.15pm causing part of State Highway 2 to close.

The NZTA warned Wellington motorists to “keep their wits about them” and take extra care as the weather battering Gisborne and Hawkes Bay moves into the region.

Gales were also raging throughout the North Island, with gusts of up to 100km/h clocked in Wellington and 90km/h at Cape Kidnappers.