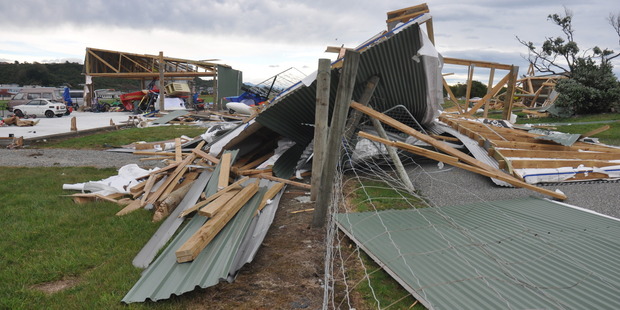 Weather from ex-tropical cyclone Ita bore down across the country yesterday and overnight, bringing flooding and slips in many areas.

The West Coast was one of the worst hit areas, with winds of 140km/hr ripping through the district.

Grey District Mayor Tony Kokshoorn said 60 houses had roofs blown off in the wind yesterday and large rainfall was forecast for tomorrow.

“Luckily the CBD area is not badly affected so it’s business as usual but the damage to the residential parts of Greymouth is certainly large.”

Mr Kokshoorn said the district would not be declaring a state of emergency because there was no threat of loss of life.

There is over 100mm of rain forecast to fall in Greymouth tomorrow and firefighters and the public are racing to secure tarpaulins on houses.

“We’ll get there. We’ve had to learn to be resilient and this is one more time we will all just whip together to get us up and running again.”

Last night 28 people sheltered in an emergency evacuation centre at the Greymouth Baptist Church and Mr Kokshoorn said he expected more people to be staying in the centre tonight.

Red Cross volunteers from Christchurch and the West Coast provided food, water and shelter for the 20-strong group, left stranded after the Cobden Bridge was closed due to high winds.

Doug Winter, a volunteer who came from Christchurch to help, described the wind as “horrendous”.

“We kept them fed and watered, nice and warm until they could go back to their houses.

Most of our damage is from Greymouth up to Granity, north of Westport, he said.

“We are assisting people to check their roofs and to make everything watertight – damaged roofs and things like that from the wind – because there’s more heavy rain expected there tomorrow.”