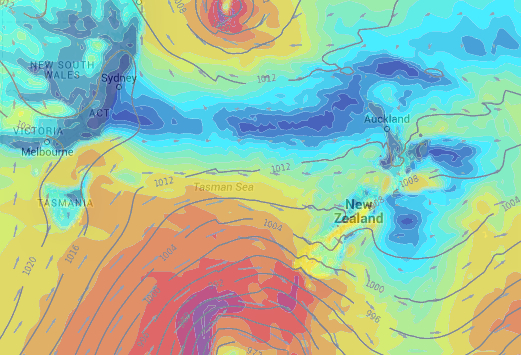 A front is moving northwards over the South Island, while west to northwest winds are building over the lower North Island.

For the east coast, strong northerlies will gust to gale strength at times about Mid or North Canterbury and inland parts of the region by midday, getting stronger as you go north.
Marlborough will also get the northwesterly winds, which may reach gale force at times too.
Those winds should ease for most of Canterbury about mid afternoon, as a front moving through will bring a change to the southwest, with breezes along the coast as that front moves through kicking up a bit of force.
This means it’s probably wise to stay close enough to shore to deal with any severe conditions if you’re out boating today – or stay aware of the weather changes through the day.

Otago has a fairly tight pressure gradient first thing this morning, with northwesterly winds, but a slightly stable atmosphere early on may keep gale winds at bay initially.
Itâ€™s when a westerly change kicks in mid to late morning that things ramp up a notch – especially near the coast, where westerlies could reach gale at times through the afternoon and evening.

For Southland, expect strong to gale westerlies for much of the day, and showers – heavy at times with a risk of hail nd thunderstorms.
Western Central Otago could see heavy rain this morning but this will ease by midday.

The West Coast is likely to see heavy rain about Fiordland, which moves north into North Westland this afternoon.
West to northwest winds along the West Coast are likely to be strong and gusty as the front moves north – a chance of a gale, but this is more up in the ranges.

For the Cook Strait area and Wellington, northwesterly winds will strengthen with gales possible at times – especially late morning and into the afternoon.
Westerlies may get gusty this afternoon in areas south of Palmerston North.

The front sliding over the upper North Island in the afternoon and into evening isn’t exactly a risk – more of a welcome change – as it should bring rain to many dry parts of the country.