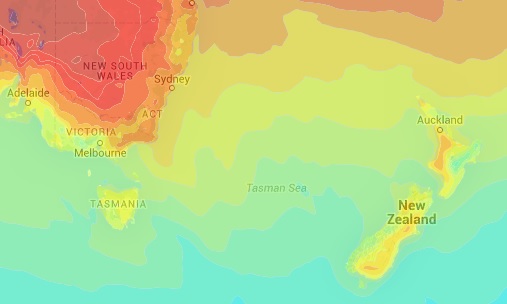 Easterlies will dominate much of the weather across much of Tuesday for the country – for both north and south.

Over the South Island the weather is looking mostly sunny with light winds,and some afternoon sea breezes for coastal areas.

Easterlies along the east coast may get breezy to brisk in the afternoon.
There is the chance of some early low cloud in the east also, then becoming mostly sunny by midday.
Isolated showers may develop about inland areas from inland Canterbury down through to Southland in the afternoon to early evening.

Inland Otago and Southland have a good chance of thunderstorms and heavy downpours possible there late afternoon or ear;y evening – but once again they will be fairly isolated in nature.

For the North Island expect easterly winds, which will be brisk along the east coast and about Auckland northwards from afternoon.
Morning cloud in the east will break to sunny spells, mostly sunny in the west and for Wellington.

About the Waikato and Bay of Plenty expect sunny areas and gradually increasing cloud.

Wednesday will be more active, as a front moves over the upper North Island during the morning and continues into the afternoon.