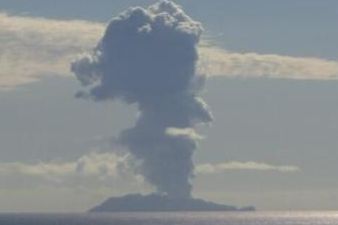 White plumes of smoke were seen rising from the volcano off the coast of the Bay of Plenty at 10.23am.

GNS Science confirmed the smoke was part of a “small eruption” on the island.

It upgraded the aviation risk over the island to red, meaning it is unsafe to fly in the area.

A red-level aviation risk means an eruption is underway with significant ash expected to be emitted into the atmosphere, according to GNS Science.

The volcanic risk for White Island was raised to level two – meaning a minor eruption is in progress.

GNS Science volcanologist Nico Fournier said the eruption appears to have continued for about 10 minutes and produced mainly steam.

A photo of White Island this morning from GNS.