What’s going on over Rangitoto? Strange light in the night sky 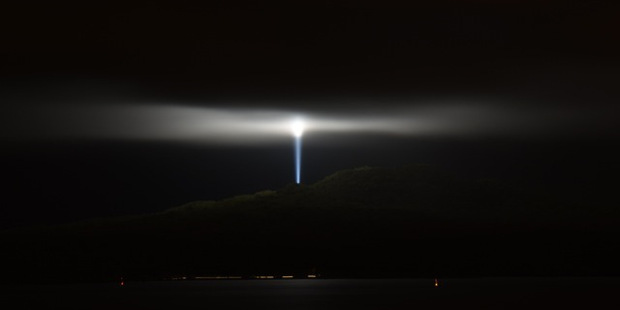 A mysterious light beaming up into the sky above Rangitoto Island has puzzled a few Aucklanders.

Several photos of the light, which appeared in the night sky sometime after 9pm and lasted about an hour, have been sent through to WeatherWatch.co.nz.

The images show what looks like a bright white light reaching high above the island into heavy cloud.

One Takapuna resident, who noticed it from her window, initially thought it was just the moon.

“It was very strange.”

Others have posted on Facebook about the mystery beam to speculate on what it might have been.

Some have brushed it off as a simple strike of lightning, some have joked about an alien invasion, while others have wondered whether it was a promo for the latest season of the X-files, which premiered this past week.

Another Takapuna resident and WeatherWatch.co.nz reader Daniel Adams felt it was unlikely to be a search beacon or spotlight because the beam was so still.

“It was very stationary, it wasn’t moving like the usual spotlight … it was a good six kilometres away and was quite wide and bright.”He said after watching it for about 20 minutes it just went out.

One of the more realistic hypothesis came from one person who has suggested it might be a type of torch called an aspherical thrower.

“Basically a really focused flashlight with no side spill, due to an aspherical shaped lens, works sort of like focusing light through a magnifying glass into a concentrated beam.”

The Department of Conservation have quelled the fears of alien invasion. Their blog Pai and Piri explains the light is part of an installation to mark the Tamaki Herenga Waka Festival over Anniversary Weekend.

It was intended to echo the form of traditional hitching posts or mooring for waka, the blog said. It would be switched on between 10pm to 1am each night for the next three nights.