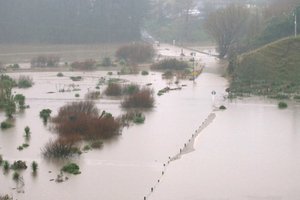 The Whanganui River has burst its banks, and the public are being warned to stay away from the river.

Alexander urged people to stay away from the river.

“We don’t want anyone near that river.”

People drinking at Taupo Quay bars had been evacuated, she said.

”We’ve sent them home and they’ve closed the pub.”

“We’ve evacuated everyone we expect would be affected by the flooding on both sides of the river but we are urging people not to go near the river. If you are affected by flooding on your property please call our welfare centre on (06) 348 8237, otherwise please stay home.”

The river level is around 8.6 metres at the City Bridge.

The Civil Defence Emergency Management Team had allocated all sandbags to areas affected by flooding.

Those who believed they were at risk of flooding should evacuate and/or ring the council on (06) 349 0001 or the welfare centre.